David Griffith and the Ultimate Torture 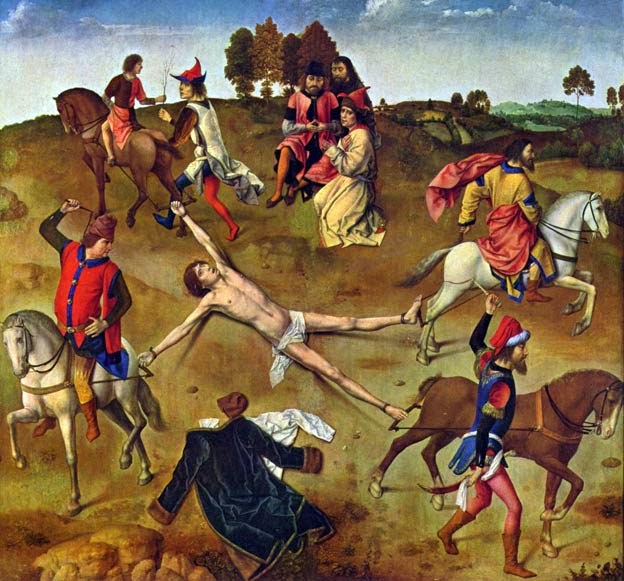 We have discussed the ultimate torture—to be Hanged, Drawn, and Quartered—here and here. Now let us take a brief look at the man whose crimes against the king were considered so heinous that this punishment was created for him.

Dafydd ap Gruffydd (1238-3 October 1282) was Prince of Gwynedd and the grandson of Llewelyn the Great, who ruled all of Wales and was on such good terms with King John that he married John's daughter. Unfortunately for Llewelyn's descendants, the kings of England did not get along well with the rulers of Wales. It did not help that the rulers of Wales had difficulties with challenges from their own subjects, either.

In 1255, Dafydd and his brother Owain challenged their older brother, Llewelyn (named for their grandfather). In a battle that lasted about an hour, Llewelyn defeated his younger brothers and had them imprisoned. Although Owain stayed in prison until his death in 1282, Dafydd was soon released (perhaps his youth was considered a mitigating circumstance).

But Dafydd did not learn his lesson. In 1263 he joined King Henry III (most recently mentioned here) in attacking his brother again. Despite the differences between England and Wales, Henry in 1267 acknowledged Llewelyn as the rightful Prince of Wales. Once again, Dafydd was reconciled with his older brother.

Not yet having learned his lesson, however, Dafydd (and other minor Welsh nobles) joined with the newly crowned King Edward I (whose long career would give him plenty of experience with traitors) in 1274 to try to conquer Wales again. This conflict resulted in the Treaty of Aberconwy, which agreed that Llewelyn (hereafter called "Llewelyn the Last") would rule, but with his death Wales would become subject to England. Prior to his death, his rule was limited to lands west of the River Conwy; the Welsh lands east of the Conwy (about 25% of the size of Llewelyn's) were put in the hands of King Edward's new friend and ally, Dafydd ap Gruffydd! Again, in the spirit of treaty-making, Dafydd was restored to friendly relations with his brother.

Dafydd's grasp of reality was scant, however, and he apparently did not realize how much of his "success" he owed to the generosity of Edward, rather than to his own political and military skill. Edward started a massive fortress-building campaign along the Welsh border, and started establishing English presence within the borders. By the spring of 1282, the discontented Welsh were assembled by Dafydd and attacked Hawarden Castle during Easter Week, beginning the final military conflict between the two countries. Llewelyn felt obligated to support his fellow Welsh in their misguided endeavor. In December of 1282, Llewelyn was killed.

Dafydd had been captured in June 1282. Edward wanted a particularly significant way to make Dafydd suffer and to make of him an example for those who might turn against the king that they had once supported. He summoned Parliament to try Dafydd for high treason, the first official case of this crime. Dafydd ap Gruffydd became the first known person of prominence to suffer the following fate:

He was tied to a horse's tail and dragged through the streets to the place where he was hanged. His body was cut down before death was certain; he was revived, then he was cut open and his entrails pulled out and set afire so that he could see it all happening.* His body was then cut into 4 pieces, the parts going to different parts of the kingdom to be put on display. The person given the task of seeing all this done, Geoffrey of Shrewsbury, was paid 20 shillings for the job.


*Supposedly, the extra-vicious nature of the punishment was recompense for having started the revolt during Easter week.
Posted by Daily Medieval at 6:43 AM