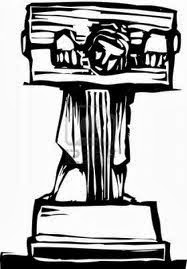 The term "John Doe" is familiar to just about everyone who knows anything about the North American* legal system. Who are these men, and where did the tradition for these names start?

We find the names being used in legal documents in England as early as the reign of King Edward III (1312-1377). But there is a slightly earlier instance recorded that seems to have escaped the notice of online encyclopediæ. It is the story of the Widow of Tours that is part of the legend of St. Ivo, and it was recorded in the Fordham Law Review by a lawyer who discovered the tale while vacationing in France.


Ivo ... lodged with a certain widow. One day he found his widow-landlady in tears. Her tale was that next day she must go to court to answer to the suit of a traveling merchant who had tricked her. It seemed that two of them, Doe and Roe, lodging with her, had left in her charge a casket of valuables, while they went off on their business, but with the strict injunction that she was to deliver it up again only to the two of them jointly demanding it. That day, Doe had come back, and called for the casket, saying that his partner Roe was detained elsewhere, and she in good faith in his story had delivered the casket to Doe. But then later came Roe demanding it, charging his partner with wronging him, and holding the widow responsible for delivering up the casket to Doe contrary to the terms of their directions. And if she had to pay for those valuables it would ruin her. "Have no fear," said young Ivo, "You should indeed have waited for the two men to appear together. But I will go to court tomorrow, for you, and will save you from ruin." So when the case was called before the Judge, and the merchant Roe charged the widow with breach of faith, "Not so," pleaded Ivo, "My client need not yet make answer to this claim. The plaintiff has not proved his case. The terms of the bailment were that the casket should be demanded by the two merchants coming together. But here is only one of them making the demand. Where is the other? Let the plaintiff produce his partner!" The judge promptly approved his plea. Whereupon the merchant, required to produce his fellow, turned pale, fell a-trembling, and would have retired. But the judge, suspecting something from his plight, ordered him to be arrested and questioned; the other merchant was also traced and brought in, and the casket was recovered; which, when opened, was found to contain nothing but old junk. In short, the two rascals had conspired to plant the casket with the widow, and then to coerce her to pay them the value of the alleged contents. Thus the young advocate saved the widow from ruin.
[John H. Wigmore, "St. Ives, Patron Saint of Lawyers" in Fordham Law Review, 1936]

Wigmore does not say in his article whether this was the origin of the names John Doe and Richard Roe. If the tale was in fact part of the life of the young Ivo, who died prior to the examples found in English court documents (as opposed to being tied to his reputation for cleverness and helpfulness by later generations), then it is either a possible origin for the names, or an example of usage that exists prior to the examples usually noted.

Or it is just a nice story.

*"John Doe" is used in the USA and Canada; the United Kingdom, New Zealand and Australia use "Joe Bloggs." To be fair, there are numerous other names for "typical" or "anonymous" individuals, in English-speaking countries and others.
Posted by Daily Medieval at 6:30 AM