The Annals of Xanten 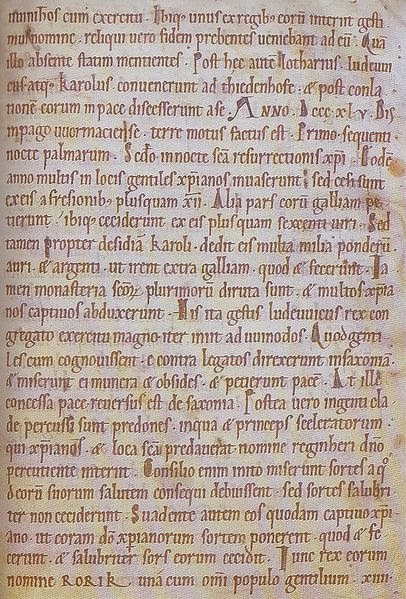 Yesterday's post on St. Anthony's Fire mentioned the Annales Xantenses, the Annals of Xanten covering 790-873. The manuscript was found in the Cotton Library (as Cotton Tiberius C XI), and assumed to be annals of the Abbey of Xanten on the mouth of the Rhine. Another theory is that it was compiled by Gerward, a 9th century royal historian connected to the monasteries of Lorsch and Ghent.


845
In that same year the heathen broke in upon the Christians at many points, but more than twelve thousand of [them] were killed by the Frisians. Another party of invaders devastated Gaul; of these more than six hundred men perished. Yet owing to his indolence, Charles ... agreed to give them many thousands of pounds of gold and silver if they would leave Gaul, and this they did. Nevertheless the cloisters of [...] most of the saints were destroyed, and many of the Christians were [led] away captive.

846
According to their custom the Northmen plundered eastern and western Frisia and burned down the town of Dordrecht, with two other villages, before the eyes of Lothair ..., who was then in the castle of Nimwegen, but could not punish the crime. The Northmen, with their [boats] filled with immense booty, including both men and goods, returned to their own country.At this same time, as no one can mention or hear without great sadness, the mother of all the churches, the basilica of the apostle Peter, was taken and plundered by the Moors, or Saracens, who had already occupied the region of Beneventum. The Saracens, moreover, slaughtered all the Christians whom they found outside the walls of Rome, either within or without this church. They also carried men and women away prisoners. They tore down, among many others, the altar of the blessed Peter, and their crimes from day to day bring sorrow to Christians. Pope Sergius departed life this year.

847
After the death of Sergius no mention of the apostolic see has come in any way to our ears.

848
On the fourth of February, towards evening, it lightened and there was thunder heard. The heathen, as was their custom, inflicted injury on the Christians. [source]

All very sad. Also, not all accurate. Pope Sergius II died 24 January 847 and was succeeded by Pope Leo IV on 10 April 847. The slowness of communication—perhaps exacerbated by the constant invasions from "Northmen" (Norse)—must have made them think that the papacy was left vacant for a longer time than it was.
Posted by Daily Medieval at 7:00 AM