The Death of Chaucer 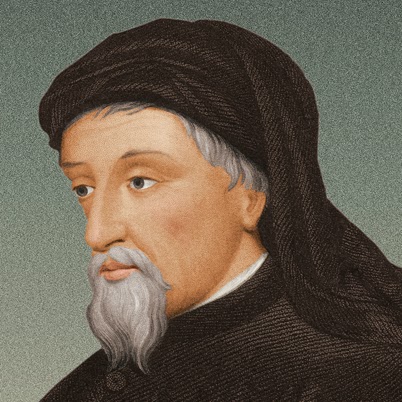 The 25th of October 1400 is the date of the death of Geoffrey Chaucer. Based on the records that exist from 14th century England that refer to him (over 300 of them!), we assume a birthdate around 1340. That would make him about 60 years old at the time of his death, a perfectly respectable number from which one could die of old age.

Unless he was murdered.

Terry Jones, who once amazed us all as the logical Sir Bedivere in Monty Python and the Holy Grail, collaborated on a book that explored what he considers the unsatisfying approach history has given us about the death of the English poet. Who Murdered Chaucer asks why—given that Chaucer was a well-known poet as well as a well-connected civil servant in his lifetime—his death occurs in absolute historical silence.


In 1400 his name simply disappears from the record. We don't know how he died, where or when; there is no official confirmation of his death and no chronicle mentions it; no notice of his funeral or burial. He left no will and there's nothing to tell us what happened to his estate. [Who Murdered Chaucer? Terry Jones, et alia, St. Martins Press, 2003]

Jones and company have a theory, and it is because Chaucer was so integrated into the culture of his day. Besides having enjoyed several well-paying positions, Chaucer had done diplomatic work for his king and was probably more "connected" than most civil servants. When Henry Bolingbroke rebelled against King Richard II and wrested the throne from him—becoming King Henry IV on 30 September 1399—the regime change would have swept from office and political favor those like Chaucer.

In December of 1399, Chaucer had taken out a very long lease on his new apartment; would he have done so if he wasn't healthy and didn't expect a long life ahead of him? He hadn't finished his major work, The Canterbury Tales: according to the "plan" in the Prologue, each pilgrim would tell two tales on the way to Canterbury, and two tales on the way back; the approximately 120 tales would have "one-upped" the 100 tales of Boccaccio's Decameron. Perhaps Chaucer expected a long and peaceful retirement, continuing what he loved to do, out of the public eye.

The authors also point out that Chaucer's contemporary and friend, John Gower, changed the dedication of his great poem, the Confessio Amantis [Latin: Confession of the Lover], from Richard II and Chaucer to Henry Bolingbroke. Even if Gower decided he wanted to support Henry over Richard, why the omission of his friend Chaucer from the dedication? Was Chaucer becoming persona non grata [Latin: "person without grace" or "unwelcome person"] in the changing political climate?

But does all this mean that Chaucer was murdered? The title of Jones' book seems more than a little sensationalistic. Would the king really have taken such a personal interest in suppressing the fate of Chaucer?

Or did Chaucer have an even more oppressive and powerful enemy who held a grudge against him and would be motivated to suppress the poet?

[If you are interested in Chaucer and his time, consider the link in the upper-right of this webpage. A Death in Catte Street is my first historical mystery in a proposed series (a sequel is in the works). A young Chaucer finds himself in the middle of a mystery of which the rest of London is unaware. Curiosity and a sense of moral obligation inspire him to delve into the history of England.]
Posted by Daily Medieval at 6:00 AM