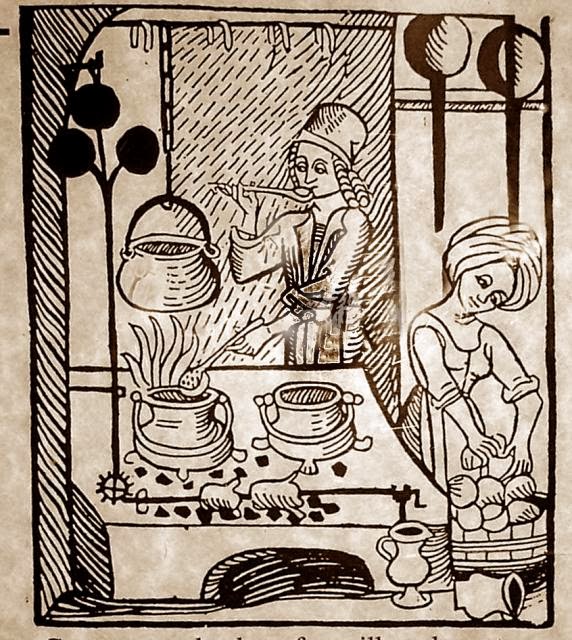 Speaking recently of Dafydd ap Gruffydd and medieval food prices put me in mind of some of the data we have on the household of King Edward I in the late 13th century. The "royal household" was responsible for organizing all domestic arrangements—from funds to furniture, from beer to bacon—for up to 600 people.

When it came to food, the royal household had two kitchens: one for the king, and one for the rest of the household. Cinematic scenes of the king presiding over a large feast hall were a rare event in the Middle Ages. He usually ate in his private chambers with a few close family members or staff, joining the crowd for special occasions such as Holy Days. The store of spices was reserved for the king, and included caraway and cumin, ginger and sugar, almonds and rice and pepper.

Although the household in general may have had less in the way of flavoring, it had plenty in the way of food. Records for the kitchen supplies of 1291-2 survive and give an idea of how much was consumed. Beef, pork, and mutton were the primary meats, with chicken and duck and enormous numbers of eggs supplementing. The Christmas meal for 1291 included 1742 chickens, 22 pheasants, 17 dozen partridges, 16 dozen mallards, six dozen plover.

A six-month span in this year's budget saw the following items purchased for consumption:
An attempt was made to curb the expenses of the royal household in 1300 with the Statute of St. Albans, which trimmed the list of those attached to the Court who were entitled to free meals. Instead, cash was offered to members of the Court to find their provender elsewhere. Although accounts show that the savings was a temporary effect—the cash amounts rising over a few years—cash instead of food would have made less work for many of the staff involved in organizing the household.

Email ThisBlogThis!Share to TwitterShare to FacebookShare to Pinterest
Labels: King Edward I