The Patron Saint of Lawyers 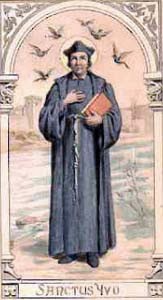 Everyone has an intercessor in Heaven, even lawyers.

Ivo of Kermartin (17 October 1253-19 May 1303) was born in Louannec, in Brittany. He studied civil law at the University of Paris, mingling with students such as Roger Bacon and Duns Scotus. He stood out from the crowd by abstaining from meat and wine, fasting with bread and water during Lent and Advent, and sleeping with a stone or book as a pillow. He also studied and prayed and helped the sick while his fellow students were having fun. In 1277 he went to study canon law in Orléans before returning to Brittany as a judge.

He gained a reputation for being a strong "advocate for the poor," helping to pay court expenses for those with little means and representing those in need before other judges. Butler's Lives of the Saints says of him:


Once, not being able to reconcile a mother and a son who pleaded violently against each other, he went and offered up mass for them, and they immediately came to an agreement together. He never took a fee, but pleaded all causes without any gratuity.

He also studied Scripture and was ordained to the priesthood in 1284. His presence in their dioceses was desired by several bishops.


He always rose at midnight to matins, and said every day mass with incredible devotion and fervour. In his preparation he continued long prostrate, quite absorbed in the consideration of the abyss of his own nothingness, and of the awful majesty of him to whom he was going to offer sacrifice, and the sanctity of the victim. [Butler]

He also used his own funds to build a hospital. He was canonized in 1347 by Pope Clement VI. Besides attorneys, widows and orphans, he has been named the patron saint of "abandoned people," bailiffs, Brittany, canon lawyers, judges, and notaries.
Posted by Daily Medieval at 7:00 AM