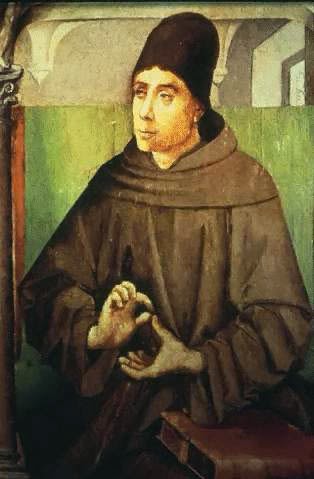 I shocked myself the other day when I mentioned Duns Scotus in the post on St. Ivo and found that I had nothing in this blog to which to link! In 300+ posts I had somehow passed over Duns Scotus (c.1266-8 November 1308).

His contemporaries refer to him as Johannes Duns, and since there was a practice of using the Christian name plus place of origin, it is assumed that he came from Duns in Scotland (although a very late notation on a copy of his "final exam" on the Sentences of Peter Lombard claims he was from Ireland). We know that he was accepted into the Franciscans on 17 March 1291. Since the earliest age at which he could be accepted into the Order was 25, and since we assume he was accepted as soon as his age allowed, we surmise that his year of birth was 1265 or 1266. That encompasses most of what we "know" of the personal life of the figure who was called Doctor subtilis [Latin: Subtle doctor] due to his penetrating philosophical and theological insights.

He got into some trouble in June 1303 while lecturing at the University of Paris. King Philip IV "the Fair" of France (previously mentioned here) was taxing church property. Understandably, he was being opposed by Pope Boniface VIII. Scotus sided with the pope and was expelled from France with about 80 other friars. They were back about a year later.

Although he never wrote a giant compendium of all his thought the way others like Thomas Aquinas did, he is known for numerous commentaries in which he untangled many of the theological controversies of the day. Hence the title "Subtle doctor." His argument for the existence of God "is rightly regarded as one of the most outstanding contributions ever made to natural theology." [source] It has numerous details, but boils down to:


Both (5) and (6) have several sub-arguments, and after (7) he moves on to further details. His underlying assumption that makes much of his thought work is that God is infinite.

He also championed the doctrine of the Immaculate Conception of Mary, quoted in 1854 by Pope Pius IX in his declaration of that dogma.

There was a movie made about him in Italy in 2011, available on Amazon.
Posted by Daily Medieval at 7:18 AM