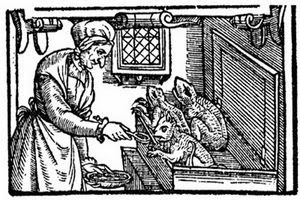 Well, not exactly. It is the first recorded witch trial. That is, the first whose details are written down, rather than a terse "hanged for being a witch."

The trial began on 29 October 1390, in the Place de Châtelet, a public square in Paris. Two women were accused of magic. Jeanne de Brigue


specialized in recovering lost or stolen items, and her talents had actually been used about six years before her arrest and trial by the priest of a neighboring village. She also cured the sick and made healthy people ill by means of magic. [Witch Beliefs and Witch Trials in the Middle Ages: Documents and Readings, by P. G. Maxwell-Stuart, p.178]

The other woman, Macette, readily confessed everything when she was questioned, including knowledge of how to bring harm to someone.


...capture two toads and put each of them separately into a new clay pot. Then she would have to take them, look at them, call here times upon Lucifer for help, recite three times the Gospel of St. John, Paternoster, and Ave Maria, put [the toads] back in the pot, and keep them under control with a bit of white bread and some breast milk. When she wanted to hurt her husband, ... she called Lucifer to her aid three times above each of the earthenware pots containing the toads before she uncovered them. After that, the recited the Gospel of St. John, and Paternoster, and Ave Maria. Once she had done this,  she opened the earthenware pots and stabbed the toads hard with long needles or small iron spikes, and the person she intended to hurt would suffer the same way the toads suffered, or something similar, and would not be able to rest anywhere, ... . [Ibid.]

Macette and de Brigue were both executed on 19 August 1391.

Happy Halloween.
Posted by Daily Medieval at 6:00 AM