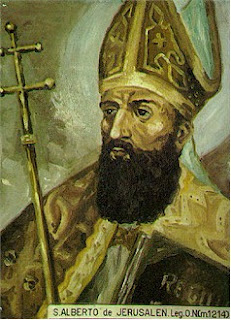 His knowledge of law and skill at speaking was such that he was asked to mediate between the papacy of Pope Clement III and Frederick Barbarossa over questions of authority. In 1199 he helped to negotiate peace between Piacenza, Italy and Parma.

In 1205, after the disastrous 4th Crusade, Pope Innocent III made him Patriarch of Jerusalem. While there, he helped a collection of hermits on Mount Carmel organize into a religious order, the Ordo Fratrum Beatissimæ Virginis Mariæ de Monte Carmelo [Order of Brothers of the Blessed Virgin Mary of Mount Carmel]. This was sometime between 1206 and 1214. The hermits approached Albert to write for them a Rule to follow. (He had written a rule for a group called the Humiliati while he was Bishop of Vermicelli.) He created the very strict Rule of St. Albert.

Albert's end was sudden and unexpected. He was summoned by Innocent III to the Fourth Lateran Council in 1215, but never made it. Before he could start on the journey, he was assassinated during a procession on the Feast of the Exaltation of the Holy Cross in the Church of Saint John of Acre. His assassin was the former Master of the Hospital of the Holy Spirit, who had been deposed by Albert for immorality. This was on September 14th. Since that day was already filled with the Feast of the Cross and several saints' feast days, Saint Albert of Jerusalem is celebrated on September 17th.
Posted by Daily Medieval at 7:30 AM