The European Middle Ages did not like bland food, and used spices extensively—often in combinations we would find odd or downright unappealing (although cinnamon-flavored pork tartlets are surprisingly very tasty). Among the many spices cultivated and grown in Europe was ginger. 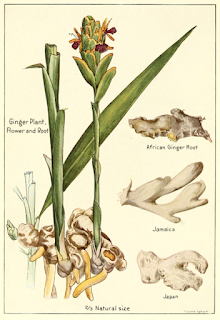 Ginger has a long history of use for medicinal and culinary purposes. References to it indicate that it was used thousands of years ago in Southeast Asia, spreading elsewhere as trade routes were established. Ancient Rome procured it from trade with India and valued it greatly. By the Middle Ages, Arab cultures were spreading westward and carrying ginger rhizomes with them to plant and sell.

The name "ginger" [Zingiber officinale] is from the Old English gingifer, the adaptation of the Medieval Latin gingiber, from Classical Latin zinger, the Romans name for the spicy root they used in cooking and healing. (No, this is not the source of the modern term "a zinger," although relating a "zinger" to spiciness is tempting.) One author's history of ginger called it "the Alka-Seltzer of the Roman world." Ginger ale is still considered good for an upset stomach. The University of Salerno, famed for teaching medicine, claimed that a recipe for a happy old age was to "eat ginger, and you will love and be loved as in your youth."

From the 11th century, ginger became more popular as a flavoring agent, used in all sorts of medieval dishes. It became so popular that its import (it would not grow in the cold wet climates of the north, although it can be grown in well-warmed greenhouses, such as the Royal Botanic Gardens at Kew) made the value (in 14th century England) of a pound of ginger equivalent to an entire sheep (1 shilling and 7 pence, if you must know).

There is a legend that Queen Elizabeth I created gingerbread men cookies as gifts for the men of her court. That is unverified, but gingerbread definitely was known to the Anglo-Saxons. A recipe for medieval gingerbread can be found here.
Posted by Daily Medieval at 7:00 AM