The Saint of Mystic, Connecticut

Off the coast of Mystic, Connecticut is Enders Island. Only 11 acres in size, it is named for Dr. Thomas B. Enders, who purchased it in 1918 from the Sisters of Charity and used it as a private estate. In 1954, his wife gave it to the Society of St. Edmund. 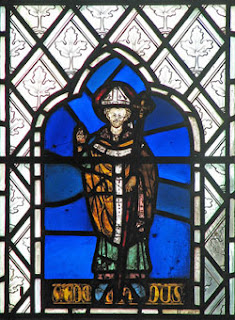 Edmund Rich (1175 - 1240), who became St. Edmund, was born on the feast day of St. Edmund the Martyr (20 November), and therefore was named for that saint. His father was a wealthy merchant, hence the surname "Rich" sometimes attached to Edmund. He studied in England and France, and lectured on Rhetoric and Arithmetic at Oxford. It was said that he studied so long at night that he was known to nod off during lectures.

Some time in the early 1200s he was ordained, earned his doctorate in divinity, and started lecturing on theology. By 1222 he was made a parish vicar in Wiltshire, and eventually became Archbishop of Canterbury as a compromise candidate after Pope Gregory IX had refused to confirm three previous appointees. The confirmation was a surprise, since Edmund championed ecclesiastical independence from Rome. But Edmund also was opposed to foreigners taking important offices in England, so he took the job to avoid the chance of the pope putting an outsider in that chair.

Edmund was a powerful preacher and a strong politician. He fought Henry on his excesses against the Church. He also fought against the Pope, who wanted the Church in England firmly under papal control. On a 1240 trip to Rome, Edmund became ill at the Cistercian Pontigny Abbey and headed back to England, but died after 50 miles. The body was taken back to Pontigny. Within a year of his death, miracles were allegedly taking place at his grave, miraculous healings that motivated full canonization in only six years. His feast day is 16 November.

Although his body was left at Pontigny Abbey, relics were granted to other locations. One of his arms  made it to North America: it is in the Chapel of Our Lady of the Assumption at St. Edmund's Retreat on Enders Island in Connecticut.
Posted by Daily Medieval at 7:00 AM