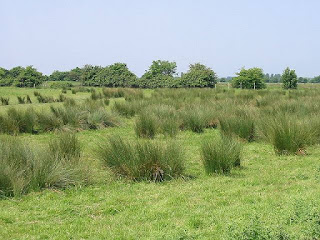 Rushes. There are about 400 species of the Family Juncus, a round-stemmed grass-like mostly perennial plant that grows in wetlands. One species in Japan is used for the soft covering of tatami mats (the mat base is composed of rice straw). Some rushes, particularly the species called "sweet flag," was used as a floor covering in Western Europe; it gave a softer surface for walking, and absorbed spills; once sufficiently dirty, it would be swept up and replaced with fresh rushes. Another popular use, accessible by any home, was to make rushlights.

Rushlights were the poor man's candles. Harvested in late summer, rushes were laid out to dry, then carefully peeled apart. The soft pith inside the rush was the "wick" of the light, and a strip of the tougher outer skin was left on to hold the pith in place. The "body" of the rushlight was tallow, rendered animal fat. Fat was heated in a shallow pan until it liquified, then the rush pith was dragged through it a few times to create a very slim taper.

There is a structural difference between candles and rushlights. In a candle, the wick is surrounded by the substance that is burned; in a rushlight, the wick itself is infused with the tallow, and there is not much tallow surrounding it. This meant you could make a lot of rushlights from a pan of tallow and a heap of rushes. This was necessary. Although the benefit of making rushlights is that it was easy and free to any household, rushlights burned very quickly: a typical 12-inch rushlight burned for 10-15 minutes. You also needed a metal holder for the thin rushlight; you could not just set it on a flat surface as you would with a candle. Because the widespread use of rushlights did not extend to the Industrial Age, metal rushlight holders were never mass produced. Existing ones are all hand-made antiques, and extremely valuable to collectors. 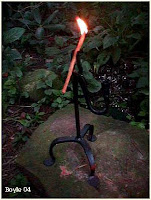 The flame was brighter if the rushlight were held at a 45-degree angle. There were, however, "night lights" consisting of a rushlight braced vertically inside a metal cylinder with holes to let the light shine through. The vertical rushlight would burn more dimly, but last longer, and provide some minimal light in a dark room.

Rushlights were common in Medieval England, but their use was revived briefly during World War II.
Posted by Daily Medieval at 7:00 AM

Email ThisBlogThis!Share to TwitterShare to FacebookShare to Pinterest
Labels: candle