Abū Muḥammad ʿAlī ibn Aḥmad ibn Saʿīd ibn Ḥazm—let's just call him Ibn Hazm—was a prime example of how medieval scholars could be very "contemporary." To be honest, some of his "modern" thinking resulted from his literal interpretation of the Koran, but the results were very interesting for his time. 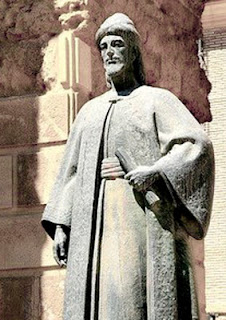 Ibn Hazm (November 7, 994 – August 15, 1064) was born into a family with powerful political connections, and from an early age he had more access to education and insights into politics than most. His close exposure to politicians gave him a healthy skepticism about the inherent (un)goodness of human beings. As a result, he turned to God as the only reliable source of morality.

Another outcome of his experience with politics was his respect for language. His analysis of language led him to the conclusion that Arabic, Hebrew, and Syriac had all sprung from a common source and changed over time as their peoples separated from each other. Contrary to the opinion of his peers, he saw no reason to consider Arabic to be superior to other languages.

This and other ideas of his caused him to be considered wise, yet controversial. He was famous in the Muslim world for finding no reason that women should be prohibited from prophethood, because the Koran did not forbid it.

The Koran also convinced him that the earth was round. In a passage in which it is stated that "He makes the Night overlap the Day, and the Day overlap the Night" the word for "overlap" derived from the word for "ball." Experimentation with models led him to conclude that the Earth was indeed a globe, and that at any moment of the day the Sun would be vertical to some point on the Earth.

He experimented with echoes in the Mosque at Cordoba to prove that sound travels at a certain speed. Also, he linked lightning and thunder, explaining the delay between the two by using his ideas about the speed of sound. He stated, but could not prove or explain in detail, that lightning caused the thunder.

His bold and controversial statements made him enemies of other scholars, but at a public burning of some of his works (we believe he produced 400 works, of which only 10% survives), he declared that the destruction of the materials did not destroy the ideas inside them.
Posted by Daily Medieval at 7:00 AM