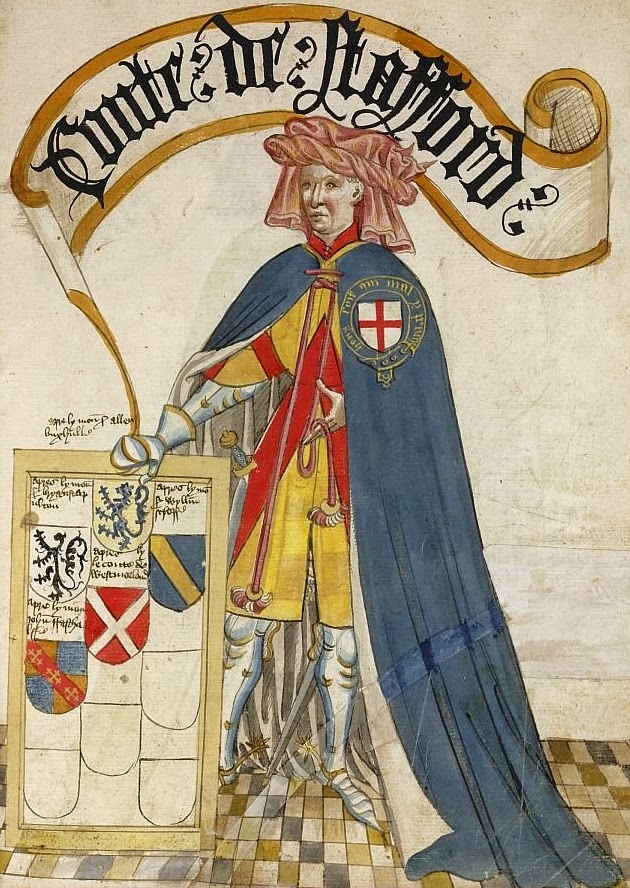 This is the story of a man who got everything he wanted...and possibly more than he deserved.

Ralph de Stafford was born 24 September 1301, eldest son of the first Baron Stafford, Edmund. Edmund died in 1308, and Ralph went to live with his mother and her new husband, joining the retinue of his maternal grandfather (for whom he was named, Ralph, 2nd Lord Bassett.

Sometime around 1326 he had married Katherine Hastings, a knight's daughter. With her he had two daughters, both of whom lived long enough to get married to knights.

At the age of 26 (in 1327) he was made a knight banneret* and fought in the wars against Scotland. He later helped to free Edward III from the control of his regents, his mother and her lover Roger Mortimer. Earning Edward III's gratitude for this and for later distinguished military service, he was made Lord Stafford by 1336 and served in Parliament. He was later (1341) made Steward of the Royal Household, and even later (1345) Seneschal of Aquitaine. These honors are indicative of the king's favor later in his life, but far earlier he had earned the friendship of Edward. The proof of this is seen in episodes involving his second wife.

We do not know when Katherine died, but it must have been prior to July 1336, because he was remarried by that time—despite opposition from his second bride's parents. Margaret Audley, daughter of Hugh de Audley, the 1st Baron Audley, was born about 1318. She was abducted by Ralph for the purposes of marriage—or perhaps for the purposes of financial gain, since she was worth £2314 per year. Ralph's estates were worth less than one-tenth of his new wife's. Her parents brought their objections to the king, who forgave Stafford's actions, approved the marriage, and appeased Margaret's father by making him an earl, the 1st Earl of Gloucester.**

In 1350, Edward decided to grant several new titles to reward military service. He created an earldom for Ralph, making him the 1st Earl Stafford, and granted an annual payment to him of 1000 marks (a mark was 2/3 of a pound).

Because of his and his wife's wealth and titles, their children (two sons and four daughters) were prime candidates for marriage in the eyes of others. They all married well, none of them having to abduct their spouses. Ralph died 31 August 1372.

*A knight banneret was a knight who had the right to lead troops under his own banner; Ralph's inheritance gave him that right.
**Technically, there had been Earls of Gloucester before this, but the line had been extinguished.
Posted by Daily Medieval at 7:00 AM