Technically, today's post is not about knitting, but about an earlier technique with a similar result known as naalbinding. Naalbinding, or nålebinding, is Danish for "needle-binding." In English it is sometimes referred to as "knotless knitting."

Some archeological finds have been designated as early knitting when they were really naalbinding. Knitting as we know it today appears near the end of the first millennium CE, whereas threads woven by naalbinding can be found dating to centuries earlier.

The difference is that, while knitting involves a continuous row of loops linked together by the use of two needles, naalbinding uses a needle to pass the whole length of the thread/yarn through each loop, and the loops must be bound together during the creation process (see the illustration above). In knitting, simply turning the piece around once all the links have been transferred to one needle means that the next row will be automatically linked to the row on the needle. Naalbinding uses shorter pieces of yarn, not one long continuous piece. 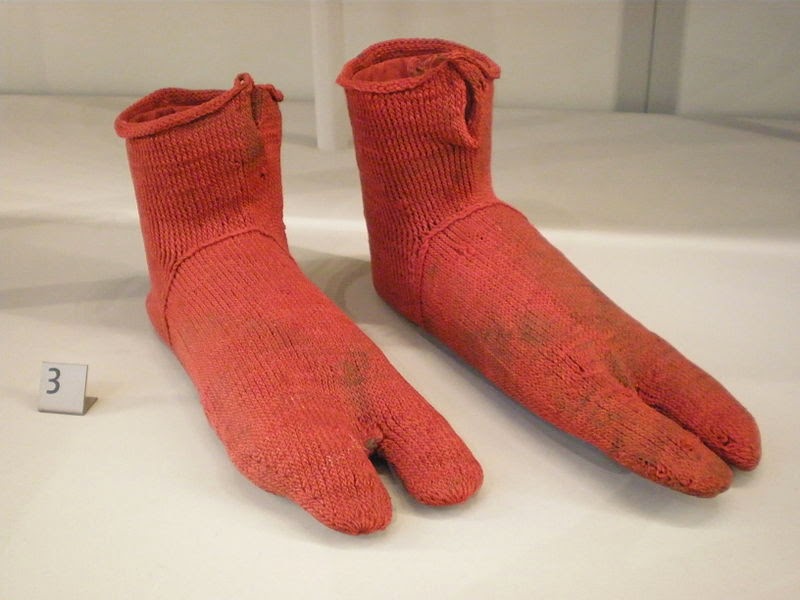 Despite the Danish label, naalbinding's earliest examples are found around the world, in socks used by Coptic Christians of the 4th century and hats and shawls of the inhabitants of what is now Peru dating to 300 BCE. The pair of wool socks shown here, meant to be worn with sandals, is in the Victoria & Albert Museum in London. They were excavated in Egypt and date to between 300 and 500 CE.

For those wishing to know more, a how-to for the process is explained and illustrated here.
Posted by Daily Medieval at 7:00 AM