The Fair Maid of Kent 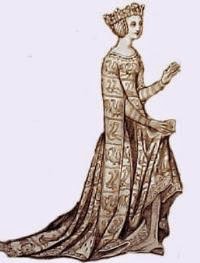 To Froissart she was "the most beautiful woman in all the realm of England, and the most loving"; in her own right she was the 4th Countess of Kent and the 5th Baroness Wake of Liddell; to Edward the Black Prince she was wife; to history she was "The Fair Maid of kent."

Her father, Edmund of Woodstock, was a son of King Edward I, which meant that she and the Black Prince were cousins—not uncommon for aristocratic marriages. She might have been able to marry him at all, however, since she had been imprisoned when she was a child.

Her father had supported Edward II (who was his older half-brother) during the conflict with Queen Isabella and Roger Mortimer. Once Edward II was deposed, Edmund was executed and his wife and children placed under house arrest in Arundel Castle. Once Edward III came to power, however, he took the family into his care. Joan was his 1st cousin, and the 2nd cousin of his wife, Queen Philippa.

Having survived the scandal of being associated with a traitor, she mdd her own royal mistake when she was 12: she made a secret marriage with Thomas Holland without getting the king's consent. Then Thomas went Crusading. While he was gone, her family—unaware that she had contracted marriage with someone else—arranged a marriage with William Montacute, son of the Earl of Salisbury. Joan did not disclose that she was already married for fear that Thomas would be executed.

Thomas eventually returned to England, having gained great wealth on Crusade, found his wife married into the family of the Earl of Salisbury, and promptly appealed for help to King Edward and Pope Clement VI. Joan expressed the desire to return to the husband of her choice, and the Earl of Salisbury promptly imprisoned her in her own home. The pope, however, chose to annul the second marriage; Joan joined Thomas, and they had four or five children over the next 11 years. Holland died in 1360.

Joan was now about 30, and Edward the Prince of Wales (later called "The Black Prince") a little younger. They had known each other growing up, and a gift from him of a silver cup suggests special affection for his second cousin. There is some evidence that the pair made a secret marriage (this was getting to be a habit of hers) in 1360. This presented a problem, because their relationship was too close for the laws of consanguinity. Edward III, however, requested of the pope that a special dispensation be made, and the two were formally wed on 10 October 1361.

Their son, Richard of Bordeaux, would become King Richard II on the death of Edward III. Joan died on 7 August 1385.
Posted by Daily Medieval at 8:00 AM