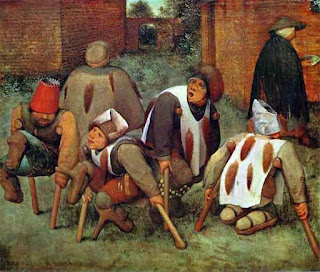 When the relics of St. Geneviève were paraded through there streets of Paris in 1129 during an outbreak of St. Anthony's fire, they seemed to work. The truth is, however, that St. Anthony's fire could abate as suddenly as it arrived, so coincidence might have figured in the miraculous cure. But what was (is) St. Anthony's Fire? Modern researchers put their money on ergotism, or ergot poisoning.

Ergot is a fungus— Claviceps purpurea—that grows on certain grains, especially rye. The early symptoms may not cause too much alarm: fatigue, nausea, diarrhea. Later, it can lead to convulsions. It becomes St. Anthony's Fire when the fungus causes the blood vessels in the outer extremities to constrict. The arms and legs do not get blood and oxygen and therefore develop gangrene. At that stage, amputation (or a miracle) is the only recourse. While the limbs were dying, the sensation of burning was intense, hence the reference to "fire." So why "St. Anthony"?

The Order of Hospitallers of St. Anthony founded hospitals to treat the disease. There was plenty of work to do. St. Anthony's Fire was a problem waiting to happen as soon as stored grain started getting moldy.

Ergot was known at some point: the black growth on the rye was studied. In 1582, a German doctor used small doses to produce contractions in pregnant women. In the 20th century, ergotamine was developed to help with migraines and cluster headaches.