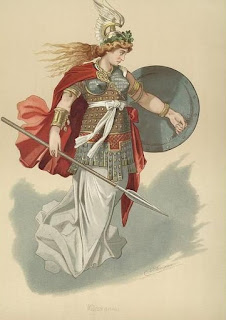 Everyone is probably familiar with the valkyries, the "choosers of the slain" in Norse legend. They didn't just carry the dead to Valhalla, however. Norse soldiers who died in battle had two possibilities: Valhalla or Fólkvangr.

Fólkvangr (Old Norse "folk field") was the domain of Freyja, Odin's wife and goddess of love, beauty, fertility, sex, war, gold, and seiðr. (Going forward, when you see the character ð, pronounce it as a voiced th, as in these.) There she sits in her hall Sessrúmnir (Old Norse "seating room"). Besides warriors, Egil's Saga (composed in the 13th century) has a non-warrior woman remarking that she will not taste food again until she dines with Freyja.

The other half of slain soldiers are carried by valkyries to Valhalla. There they are called the einherjar (Old Norse "once fighters") who prepare for the final battle at Ragnarök. Valkyries in Valhalla serve mead to the einherjar.

Visual depictions of valkyries are ... vague? We have Viking Age art with women in it that could be valkyries, but we just don't know. Silver amulets with women holding drinking horns are numerous, especially in graves. A silver-gilt figurine found in Denmark and dated to 800 CE shows a female with bare arms holding a shield and sword. When you look for females carrying drinking horns, you will find them all over Northern Europe, in metal and carved on rune stones.

Outside of Scandinavia, the Anglo-Saxons also had a similar concept. The Old English word wælcyrge might have been a loan-word from Old Norse or an independent idea. The charm "For a Swarm of Bees" seems to compare a swarm of bees to a ride of the valkyries.

How did the idea of female choosers of the slain arise? We'll never know for certain, but some scholars think they were originally demonic entities who swarmed over the dead in battlefields. As concepts shifted and battle became more glorified, warriors were honored with an afterlife. Getting to that afterlife required a mechanism, and the demonic entities connected with death became noble entities carrying fallen soldiers to their reward. They go from Furies to Norns, involved in the fate of warriors.

It is likely that poetry helped re-shape the idea and function of the valkyries. Njal's Saga is an Icelandic saga that describes events between 960 and 1220. It describes an incident in which a man secretly observes valkyries at a loom, weaving and singing about who will die at the Battle of Clontarf (Dublin, 1014 CE). They then ride off, singing "start we swiftly with steeds unsaddled—hence to battle with brandished swords!"

If you were to search, say, Facebook for the name "Valkyrie," you would find several. Whether that is a given name or a nickname the person has chosen for herself isn't clear. I personally know an actual "Valkyrie" who reads this blog. Hi, Kyrie!

And now for something completely different: the Battle of Clontarf. See you tomorrow.

Posted by Daily Medieval at 8:00 AM