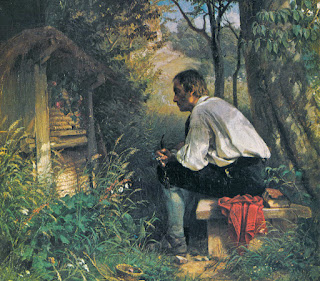 I remember the character Queenie in the TV show "Lark Rise to Candleford" (based on the partially autobiographical books by Flora Thompson) speaking to several hives of bees, saying "Bees, bees, your master's dead; I must be your mistress now." The need was to explain to the bees that the person maintaining the hive was gone so that they could mourn properly and then attach to a new owner, not just fly away to seek a new home. The illustration here is "The bee friend" by Hans Thoma (1839-1924). He is speaking to his bees, because tradition holds that the bees must be informed of important events.

Bees were important for wax and honey, and a hive/colony could be kept going for years, with a strong bond developing between the family and the bees. You would not want the bees to have a reason to "swarm" and leave, so keeping them "in the loop" was important. Besides just "telling the bees," you could use a spoken charm to try to keep them.

One such charm was the Lorsch Bee Blessing, written down (we think) in the 9th century in Old High German and used to keep the bees from leaving. Translated, it says:

Christ, the bee swarm is out here!
Now fly, you my animal, come.
In the Lord's peace, in God's protection,
come home in good health.
Sit, sit bee.
The command to you from the Holy Mary.
You have no vacation;
Don't fly into the woods;

Neither should you slip away from me.
Nor escape from me.
Sit completely still.
Do God's will.

There also exists "For a Swarm of Bees," an Anglo-Saxon charm intended to prevent the bees from swarming and going to a new location.

Settle down, victory-women, sink to earth,
never be wild and fly to the woods.
Be as mindful of my welfare,
as is each man of border and of home.

Clearly each poem/charm indicates how important a thriving hive was for the person needing the wax and honey.

The "victory-women" of the first line of "For a Swarm of Bees" is curious. The Anglo-Saxon word is sigewif  and Jacob Grimm (of Grimm's Fairy Tales) and other scholars think it may be drawing a poetic comparison to the valkyries of Norse myth. Perhaps the bees are compared to valkyries because of their weapon (sting) and the way they ride to battle (swarm)?

Speaking of Valkyries, I mentioned one once when discussing the real historical figure portrayed in the 2013 TV show The Vikings. I think the valkyries need a little more explanation.