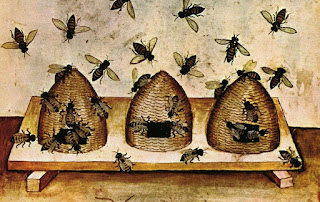 Sugar cane was cultivated thousands of years ago—in Southeast Asia; mass cultivation and importation to Europe was not available in the Middle Ages. But Europe had honey.

Honey is a preservative.

Honey can be used in medicine.

But there were also more...creative uses.

For instance, a peasant working on a manor could pay his rent in beeswax and honey.

At least one late medieval manual tells us Jewish children would learn their letters by, once having written the letters on a slate, covering the slate with honey. "The child then licked them so that the words of the Torah might be 'as sweet as honey'." (No reports exist on the efficacy of this pedagogical method.)

Manuals had differing recipes for mead, but one suggests to crush the honeycombs by hand or pestle (and mortar), strain the honey, mix it with water in a ratio of 1:4, let it sit for three days, then boil until it is at the concentration you prefer. It was then strained through linen and allowed to ferment. Mead was very popular, and so common that in 1015 in the city of Meissen, Germany, mead was used to put out a fire because the town had more mead at hand than water. This would have required a lot of honey available for the brewing.

Regarding its medicinal use: the Romans used it in medicinal concoctions, mostly for flavoring, but after the fall of the Roman Empire very little is written about honey's uses in medicine. Its antibacterial effects were not demonstrated until 1892 by a Dutch scientist.

I've got a few more things to say regarding bees themselves next time, and then we'll turn to something else.