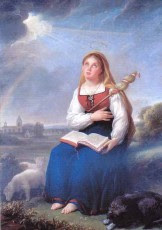 St. Geneviève was born a peasant in Nanterre around 419/22 CE. One day, while St. Germanus was passing through Nanterre, she told him she wanted to devote herself to God. He told her she should live a life espoused to Christ. At the age of 15, she decided to devote herself to the Christian life and move to Lutetia.

She spent 30 years mortifying her flesh through extensive fasting and abstaining from meat. Her austerity was considered excessive by her ecclesiastical superiors, who urged her to deprive herself less. She drew many visitors due to her piety, even divine visitors: she reported so many visions of angels that those jealous of her threatened to drown her in a lake. A visit by St. Germanus convinced her detractors to trust her.

Her piety was so strong that, when Attila was approaching Paris in 451, she convinced the people to pray instead of fleeing; the strength of her prayers turned the Huns instead to attack Orléans instead (I guess they did not have a saint to pray for them). In 464, Clovis and his father Childeric were besieging Paris (Gallo-Roman clergy were very resistant to the Frankish attempt to bring all of Gaul under its banner), Geneviève crossed their lines to bring grain to the city, and presided them to be merciful to the citizens.

Clotilde, the wife of King Clovis, was a patron and supporter of Geneviève, and may have commissioned her biography. Clotilde—a Catholic whom Clovis married partially to placate the clergy, whose cooperation he eventually realized he would need—was known for religious patronage; you can read about an example here.

Clovis (no doubt at Clotilde's urging) built an abbey where Geneviève could live. After her death, her tomb at the abbey saw many visitors and many miracles. In 1129, an epidemic of ergot poisoning was ravaging the city; it subsided after her relics were paraded through town.

Louis XV ordered a new church for the "patron saint of Paris." Before it was finished, her relics were destroyed in 1793 during the French Revolution, but some were recovered, and the church was finished and reconsecrated in 1885.

I was going to talk next about why she moved to "Lutetia" (see the first paragraph) and yet was called the "patron saint of Paris," but right now I really want to talk about ergot poisoning, so that's next.