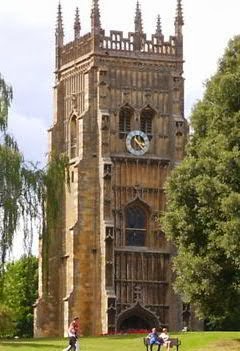 The early history of the founding of religious buildings goes hand-in-hand with visions and miracles, such as the August snowfall in Rome. The history of Benedictine structures is no exception.

Evesham Abbey was founded when Bishop (later saint) Ecgwine received a visit from a shepherd or swineherd named Eof. Eof told him of a vision he had of the Virgin Mary requesting that a monastery be built in her honor on a certain spot where he grazed his animals. ("Evesham" means "Eof's town.") Bishop Ecgwine built the monastery; we don't know when construction started, but we do have the charter of Pope Constantine granting privileges to the abbey in 709, firmly establishing its founding as an abbey.

Ecgwine was all too happy to resign his bishopric and become abbot until his death in 717.

Of Evesham Abbey only a bell tower remains since the Dissolution of the Monasteries under Henry VIII. Evesham had trouble when the Danish invasions led to the monks being replaced. Within a generation, fortunately, St. Dunstan (previously mentioned in association with abbeys here) re-established the Benedictines there.

Later, when William the Conqueror took over the country, then-Abbot Æthelwig wisely hastened to pledge loyalty to him. Evesham and its Benedictines flourished under Norman rule, so much so that it supposedly earned the envy of the bishops of Worcester.
Posted by Daily Medieval at 7:00 AM