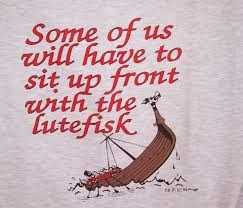 Today is an important day in Sweden: Anna's Day, celebrating all people named Anna. It is also the traditional day to start preparation of lutefisk in Sweden and Finland, so that it is ready for the traditional meal on Christmas Eve.

It is made from cod, soaked in cold water, changed daily, for five or six days, then left in cold water with lye for two days. The fish swells and takes on a gelatinous consistency. This stage also raises its pH value to 11-12, making it very caustic and downright dangerous to eat. In order to make it edible, it must be soaked in cold water for another week, changing the water daily to flush out the lye.

Why do this? The origin of the process is uncertain (see below), but the lye would make the fish unappetizing to wild animals; perhaps it was done to allow large amounts of fish to be left hanging on drying racks out in the cold air. It certainly helps preserve the fish. Treating food to make it more alkaline is also used in the preservation/preparation of corn into hominy.

Lutefisk has a history that stretches back centuries. Scholarly research claims it is first mentioned in the late 18th century; a cookbook from 1845 describes the preparation of the lye used to make lutefisk by combining limestone and birch ash in water. Historians, however, have found a reference to lutefisk by a Swedish archbishop in 1555, and that a letter from King Gustav I (1496 - 1560) mentions it in 1540.

Folklorists suggest an even earlier reference: when Vikings raided Ireland, St. Patrick had his followers make them an offering of fish—spoiled fish. The Vikings seemed not to mind, so Patrick had his people pour lye on the fish, hoping to poison the Vikings. The Vikings, against all expectation, found the fish tasty and demanded the recipe.

But let honesty prevail: the major Viking raids in Ireland happened a few hundred years after Patrick.  Still, lutefisk was probably around prior to King Gustav. The "Vikings enjoy something we think is vile" was probably an old joke at the expense of Vikings. I suppose the tale could be partially true, but Patrick was not likely to be the instigator.

So go buy some whitefish (cod or ling), start soaking it in cold water, and get some birch ash ready!
Posted by Daily Medieval at 7:00 AM