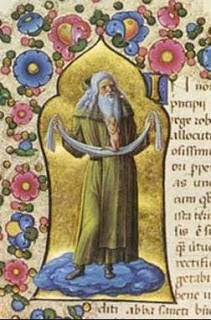 A brilliant scholar and fervent theologian/philosopher did such a good job at achieving his aims that the Church realized they had to suppress his work!

Ramon Lull was born in Majorca in the 1230s and probably was a courtier at the court of King James II of Aragon. He had a vision at the age of 30; while about to write a love letter, he turned and saw Christ on a cross hanging in the air. This image appeared to him five times, inspiring him to the religious life with very specific goals, one of which was to convert the Muslims to Christianity.

He did not intend simply to travel eastward and preach to the Muslim world; he had a more reasoned plan than that. He would counter their religion with logical and philosophical arguments that were so clear as to compel them to abandon their faith for his. His first task was to counter their great scholar, Averroes, and his first step was showing that theology and philosophy could be reconciled.

The Arab world had found comfort in separating the two, explaining that what was true in philosophy could be false in theology. Averroes himself had relied on this distinction to avoid persecution for his heretical idea about the non-existence of a unique soul that survives death. Lull decided to prove the Arab world wrong by reconciling philosophy and theology, raising the Christian West to an intellectually superior status that the East would have to fall in line with. He allied the natural and there supernatural, arguing that divine truths needed to be approached with reason guided by faith. Likewise, faith needs reason, lest it be misguided by personal desires or emotions. Lull had created a machine, the Ars Magna ["Great Art"], which would affirm the truth of propositions by lining up geometrically shaped pieces when levers and cranks were used. The machine was a three-dimensional representation of his "Lullian Circle" that could demonstrate all the possible truths of his system.

Lull's followers called themselves Lullists and spread the glory of his writings.* He met John Duns Scotus in 1297, who gave him his nickname of "Doctor Illuminatus" for the illumination he brought to the faith. His followers gained such influence in Spain that they were able to endow chairs at the Universities of Barcelona and Valencia.

We know that he was stoned to death by the Muslim inhabitants of the town of Bougie on a mission to North Africa. Documents by Ramon Lull exist that can be dated to December 1315, but he was probably dead shortly after.

Despite his fame and religious zeal during his lifetime, and his martyrdom, he has never been considered for canonization by the Roman Catholic Church. The Church realized that his ideas were too radical. Sixty years after Lull's death, Pope Gregory XI (1327 - 1378) condemned his work, as did Pope Paul IV (1476 - 1559) a century after Gregory. Linking the natural and supernatural together was not going to work for the Church as a whole, despite the efforts of the "Illuminated Doctor." There were too many things that relied on faith for the Church to insist that, without reason, they would not pertain.

Centuries after Lull's death, some of his other writings were discovered that made his name prominent in the field of "election theory," but we'll save that for another time.

*He is considered to be the first major writer in the Catalan language.
Posted by Daily Medieval at 7:00 AM