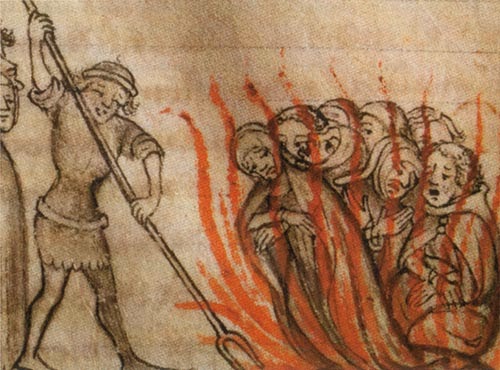 (This one may meander a little; just hang on.)

A few days after William Tell shot the apple from his son's head in 1307, another significant event took place on the other side of the Alps. On the 22nd of November, Pope Clement V issued a papal bull requesting that all countries in Europe arrest the Knights of the Temple and confiscate their property.

Clement had not always been an enemy of the Templars, but their purpose was fading. They existed, along with the Hospitallers, to escort pilgrims and maintain some security in the Holy Land, but European possessions in the Holy Land had all been re-taken by non-Christians. These Orders maintained their wealth and property in Europe, although the reason much of it had been awarded to them was now gone. A couple years earlier, in 1305, Clement had suggested that the Templar Knights and the Hospitaller Knights merge, since there seemed little reason for two such Orders under the circumstances. He invited the Grand Masters of each Order (Jacques de Molay for the Templars, Fulk de Villaret for the Hospitallers) to the Vatican to discuss it, but neither would agree to the merger.

This alone wasn't enough to turn Clement against the Templars, but he had some pressure. The King of France, Philip IV, owed the Templars a great deal of money, and decided that arresting all the Templars in France on charges of impropriety and confiscating their property would be a way to square his debts. Philip had taken action on October 13. It was a Friday. Jacques de Molay was burned at the stake, and it was downhill from there for the Templars. (Clement gave all their European possessions—that were not confiscated by Philip—to the Hospitallers.)

...and this has given rise to one theory about why "Friday the 13th" is considered an unlucky day. In fact, this is the theory that friends tell to me most often, since I am known to have an interest in the Middle Ages. Someone has also put forward the idea that the day has been considered bad luck since Chaucer, because the line "and on a Friday fell all this misfortune" appears in The Nun's Priest's Tale of The Canterbury Tales. (That is not an indication that Friday itself was unlucky; Chaucer often inserted small bits of info that make the tale seem more personal.) As I did with the nursery rhyme "Ring Around the Rosie," however, let me splash some cold water on this theory.*

References to an actual unlucky day being a Friday the 13th of the month don't appear prior to the 20th century. A Boston stock promoter (and some say manipulator), Thomas Lawson (1857 - 1925) wrote a book about an unscrupulous stock broker who creates a panic on Wall Street to take advantage of the situation. The book is called Friday the Thirteenth, and he chooses that day because on Wall Street it is "Bear Saints Day" (whatever that is), not because it is inherently unlucky. "Friday the 13th" becomes a popular superstition after this book, according to one writer. Searching Google's Ngram viewer (which scans texts that Google has entered into its electronic database) for the phrase "Friday the 13" shows a steady rise of references to the term after 1905. There are earlier references as well, but if you search for "Friday the 12" or "Friday the 10" you will find similar results. There is no hard evidence I can find that "Friday the 13th" dominated the cultural consciousness prior to our Modern Era.
Posted by Daily Medieval at 7:00 AM