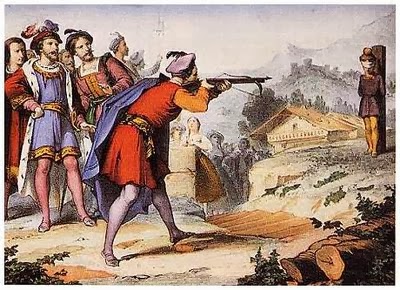 Today is the anniversary of William Tell's famous feat in which he shot an arrow through an apple on his son's head with a crossbow bolt. It happened in 1307, and here's the whole story.

In 1307, the new advocate of the Swiss town of Altdorf was an arrogant man named Gessler. He had a hat set on a pole in the town square, and all who passed were supposed to bow to the hat as a sign of respect for Gessler. One day, Wilhelm Tell and his son came into town and passed the hat without paying their respects, for which they were arrested. Gessler said they would be released if Tell—who was famous for his strength, his mountain-climbing skill, and his archery skill—could shoot an apple off his son's head. Tell drew two crossbow bolts from his quiver, and split the apple on the attempt.

Gessler asked him "Why the second arrow?" Tell admitted that, if he had missed and killed his son, the second arrow would have gone right into Gessler. Gessler had Tell re-arrested and sent to prison at Küssnacht castle. On the way there, the ship carrying him became endangered in a storm on Lake Lucerne, and Tell was unbound by the crew to help row to safety. Tell escaped the boat at a rocky site even now called Tellsplatte [German: "Tell's slab"]. Tell proceeded to Küssnacht and waited for Gessler, whom he killed with an arrow. His defiance helped inspire the rebellion that led to the Swiss Confederacy. He later fought for Switzerland in the Battle of Morgarten (1315). He died in 1354.

All this early-14th century detail comes from a history of Switzerland written about 1570 (and not published until a couple centuries later) by historian Ægidius (Giles) Tschudi, who is known to have been less than accurate in discussing his own career and family. William Tell's name is mentioned as early as 1475, but without all the detail offered by Tschudi, whose source for the story is unknown.

It also needs pointing out that the idea of a heroic archer who defies authority is seen earlier in England (Robin Hood, who supposedly harried Prince/King John in the late 12th century) and the Danish Palnatoki, who is forced in to the same contest by King Harald Bluetooth. Palnatoki also pulls more than one arrow from his quiver, intending to kill Harald if Palnatoki's son dies.

The legend of William Tell has inspired plays, operas, art and anecdotes, but his historicity is extremely doubtful.
Posted by Daily Medieval at 7:00 AM