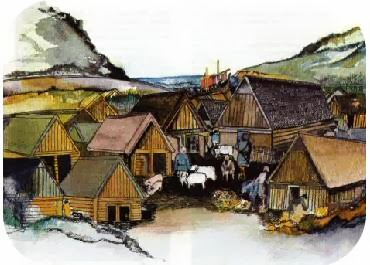 When we think of the Viking invasions of England, we usually think of the destruction of villages and people's lives. This is understandable, since the Vikings were coming for land and plunder, not to make friends. Ironically, however, the Vikings were responsible for a significant expansion of urban centers in England at the end of the 9th century and beginning of the 10th.

Archaeological excavations of prominent towns in England show that many of them experienced a  surge in growth during the above-mentioned half-century span. York, Cambridge, Stamford, Lincoln and Norwich are just a few of the cities that show the features that characterize this expansion:


They came to form separate urban nuclei of a distinctive but hitherto unrecognized topographical type, which show common characteristics: they usually developed as linear settlements on low-lying ground along existing routeways leading to earlier centres, many of them at bridging points of major rivers. All of them occupied areas with easy access to river and estuarine navigation. [Jeremy Haslam, Early Medieval Towns in Britain, 2010, Shire Publications]

The assumed catalyst for this change from the British settlements to the more robust Viking towns is the opportunities for trade opened up by the new Viking inhabitants. The Vikings had more advanced ships, capable of longer trips, and they traded not only with Europe and the Scandinavian markets, but also with Asian markets.

There is an additional curious feature shared by many of these settlements. Many of them include churches dedicated to St. Clement. This is no coincidence, but that's a story for another day.
Posted by Daily Medieval at 7:00 AM