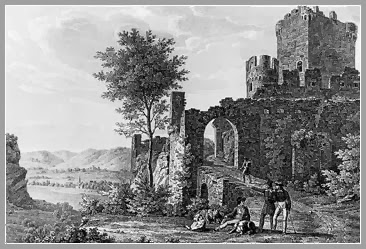 In a document of 1051, the former Queen of Poland, Richeza, grants to her nephew, the palatine count Henry I, the possession of Cochem Castle. This is the first reference to Cochem Castle, which is believed to have been built about the year 1000.

Rising over 300 feet above the Moselle River, it was built with 12-foot thick walls enclosing an original 17x17-foot square keep in the Romanesque style. There is evidence of rebuilding/expansion around 1056, presumably by count Henry. King Konrad III (1093-1152) took control of the castle from the palatinate counts (who asserted extensive control locally), turning it into a castle under the rule of the king. The castle continued to change hands, however, finally ending up occupied by Louis XIV, the Sun King, in 1688. French troops destroyed the town and the castle with explosives in 1689. It lay in ruins until 1868, when it was purchased by a businessman who began rebuilding it in the neo-Gothic style as a summer residence. 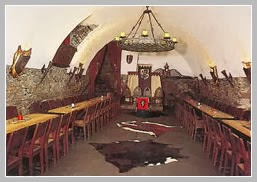 Now, however, it is owned by the town of Cochem and managed as a tourist attraction by Reichsburg Cochem Ltd. Besides tours, one of the chief attractions is the restaurant, open daily until 6:00pm. They also offer a Medieval Feast, a four-hour event in which you eat with your hands and are entertained by jesters. These dinners are offered on Friday and Saturday evenings.

Which means that the feast hall is available on Thursday nights, especially in late November, when Americans celebrate Thanksgiving. If you are American military personnel stationed in Germany, you can take part in a USO-organized Medieval Thanksgiving Dinner at Cochem Castle. For $99/person, you get transportation to the castle with a USO guide, a tour of the castle, the aforementioned Medieval Feast, plenty of food, two drinks, entertainment, and a knighting ceremony at the climax of the evening.

By the time you read this, it will be too late to join (maybe), but you can always start planning for the future.
Posted by Daily Medieval at 7:00 AM