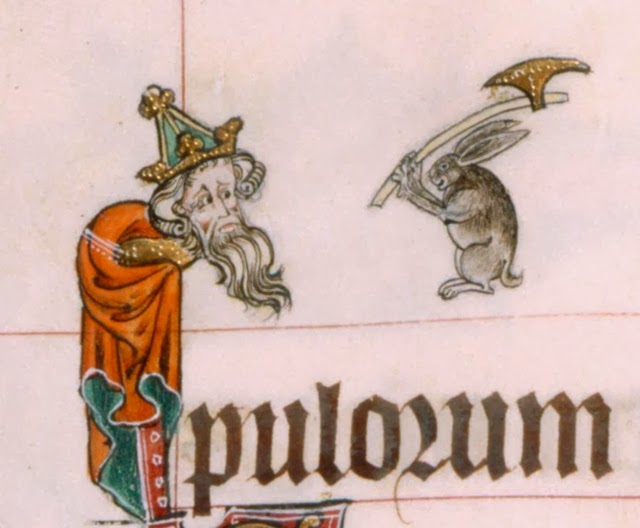 A friend dared me to comment on this article on vulgar scenes from illuminated medieval manuscripts. Never one to avoid a challenge, I picked a particular (and the least vulgar) piece from a particular manuscript.

The Gorleston Psalter is so-called because of its association with the church of St. Andrew in Gorleston, Norfolk. Psalter is from an Old English word that originally came from Greek and refers to a stringed instrument. It is used to refer to personal prayer books, or books with the  Old Testament Psalms. They are frequently illuminated—by hand, since they were made decades before printing. The illuminations are frequently a far cry from any pious topic or image, and seem designed to distract the viewer from boredom. 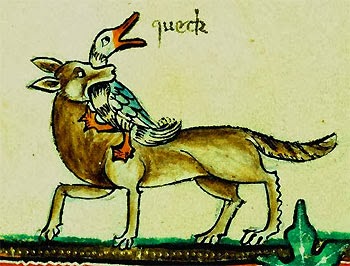 The illuminations of the Gorleston Psalter are usually represented by a fox carrying a goose in its mouth (the duck is actually saying "queck"); this may be because it is the only straightforward image that doesn't take a left turn into the fantastical. Above (from the article) is a bishop bowing his head before the executioner's axe; the executioner is a rabbit.

Go here and see how the British Library has put the Psalter online. You can see the creature with a bill and a man's face coming out of its ass, and many other odd and exotic combinations of personified animals or human-beast hybrids.

Interest in the Gorleston Psalter was revived about a decade ago when the Macclesfield Psalter unexpectedly surfaced. The artwork in the Macclesfield was so similar to the Gorleston that it is accepted that the artist and copyist was the same for both. Internal cues link both to the church of St. Andrew's in Gorleston. The owner put the Macclesfield Psalter up for auction at Sotheby's. It was about to go to California until a coalition of several British celebrities began a funding campaign that matched the winning bid of £1.7 million and kept the Psalter in England.
Posted by Daily Medieval at 6:30 AM