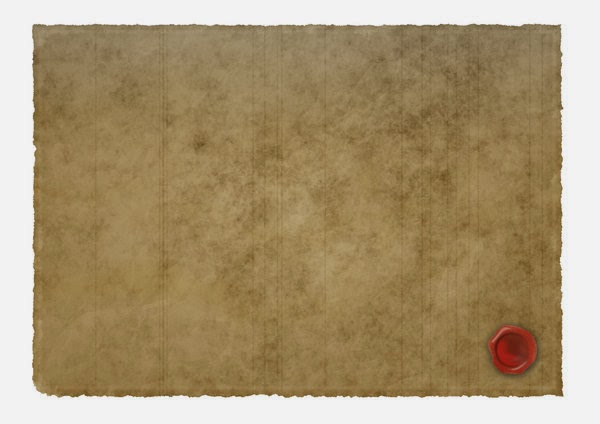 The term parchment is often applied to any animal skin used for writing on, but historically it was used for sheep or goat skin. Cow or calf skin was also used, but was turned into vellum. Very fine vellum came from very young calves, or even still-born calves. These pages were smaller than the pages that could be made from adult animals.

Although vellum is from the same word as calf, Latin vitellus, parchment has nothing to do with the material. It derives from Pergamum, where it is said parchment was invented during a dearth of the export of papyrus out of Alexandria.* According to Pliny (27-79 BCE), this was under King Eumenes; he does not distinguish, however, if this was Eumenes I (263-241 BCE) or Eumenes II (197-158 BCE).

The person who turned animal skins into parchment in the Middle Ages was called a parchmenter. The parchmenter needed to pick skins carefully. The hair of the animal was a consideration, since the skin below would match it. Black-furred animals would yield darker parchment, less suitable for writing on.

Making parchment in the Middle Ages was fairly straightforward. The skin was placed in cold water for at least a day to clean off any blood and dirt. A lime solution was next, to eliminate the hair. For a week, the skins would be stirred with long wooden poles a few times each day. After the lime bath, they would be stretched on a wooden frame, with thread or leather thongs attached through numerous holes around the edge to ensure that it stretched and dried flat. The skin would be scraped with a curved blade to remove any remaining hair. The occasional oval hole seen in parchments was not the result of bookworms. Imperfections from tick bites in the living animal produced holes in the skins that would expand during the stretching and drying process.

Scraping the parchment was an ongoing process. By the 12th century, scraping skins to tissue thinness was common. Extensive rubbing with chalk and pumice helped produce a smooth surface that would take ink without spreading through the imperfections in the surface.

After the treatment, it was removed from the frame. It was soft and supple enough to roll up until needed, when it was cut into sheets that were usually sold by the dozen.

*Supposedly, Alexandria was using so much of the papyrus reed that it was being over-harvested; they simply could not afford to export any.
Posted by Daily Medieval at 7:00 AM