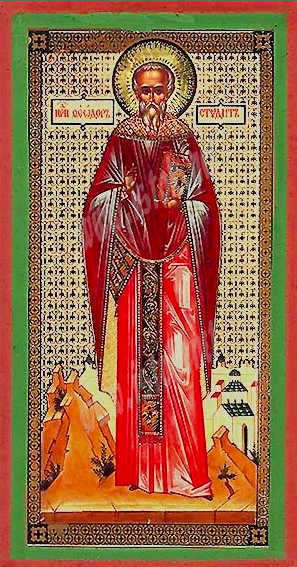 St. Theodore of Stoudios (759-11 November 826 CE) was a highly educated member of a well-connected family in Constantinople. His father and uncle were public officials who controlled a large part of the finances in the reign of Constantine V (741-755). He was probably in line for a very nice civil service position, but his uncle's influence changed his fate.

The uncle, Platon, left civil service during the reign of Constantine's successor, Leo IV (775-780), and entered a monastery in Bithynia (east of Constantinople, on the shore of the Black Sea). Upon the death of Leo, Platon persuaded his sister's entire family to take monastic vows. They all returned with him to Bithynia, and established the Sakkudion Monastery on the family estate.

The family did not exactly stay away from politics, however. Leo was succeeded by Constantine VI (776-797), who decided to put aside his first wife and marry her lady-in-waiting. In the absence of evidence that the first wife was an adulterer, this was not easy for anyone to swallow. The Patriarch Tarasios eventually consented to the divorce, but he refused to perform the second wedding (as was customary for a ruler), leaving it to a priest named Joseph of the Hagia Sophia.

Despite the fact that the new wife was a cousin of Theodore, he objected to the whole affair and called for the excommunication of Joseph and everyone who received sacraments from him, which would necessarily include Constantine and his new wife. He had no authority to enforce this, so no actions were taken. The emperor tried to make peace with his new wife's relatives; they refused; Constantine sent troops to the monastery to disperse the community and send Theodore and other monks to exile in Thessalonika. A year later, however, Constantine was deposed and his mother became the Empress Irene. She undid many of her wayward son's actions, including lifting the exile on the monks of the Sakkudion Monastery and imprisoning Joseph.

When an Arab attack in Bithynia forced the monks of Sakkudion to flee to Constantinople, Empress Irene offered Theodore the leadership of the defunct Stoudios monastery. He set about restoring the library and scriptorium, and redecorating the church. (Theodore was opposed to the strong Byzantine element of iconoclasm that forbade images.) He also started writing letters; lots of letters, which he sent to fellow monks near and far. In one of them he makes the first known statement against slavery. Writing to one Nicolas, he says:


Do not obtain any slave nor use in your private service or in that of the monastery over which you preside, or in the fields, man who was made in the image of God. For such an indulgence is only for those who live in the world. For you should yourself be as a servant to the brethren like-minded with you, at least in intention, even if in outward appearance you are reckoned to be master and teacher. [source]

It is interesting that he seems to condemn slavery because it is a "worldly" activity, not necessarily because it is inherently "bad." But it was a start.