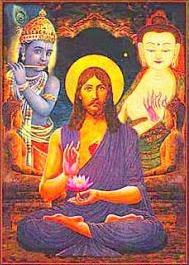 The Middle Ages loved stories about saints finding God. Here is one of them, that was repeated through the centuries:


Many inhabitants of India had been converted by the Apostle St. Thomas and were leading Christian lives. In the third or fourth century King Abenner (Avenier) persecuted the Church. The astrologers had foretold that his son Josaphat would one day become a Christian. To prevent this the prince was kept in close confinement. But, in spite of all precautions, Barlaam, a hermit of Senaar, met him and brought him to the true Faith. Abenner tried his best to pervert Josaphat, but, not succeeding, he shared the government with him. Later Abenner himself became a Christian, and, abdicating the throne, became a hermit. Josaphat governed alone for a time, then resigned, went into the desert, found his former teacher Barlaam, and with him spent his remaining years in holiness. Years after their death, the bodies were brought to India and their grave became renowned by miracles. [source]

Typical hagiographical story of the creation of Saints Barlaam and Josaphat. Never officially canonized, they were nonetheless embraced by the Roman list of martyrs (with a feast day of 27 November) and the Eastern Orthodox church with a feast day of 26 August (Greeks) or 19 November (Russians).

The story of Josaphat turning from the life of a prince to the life of an ascetic mirrors that of Buddha. On the other hand, it mirrors the stories of several Christian saints, so the identification with Buddha seems a little presumptuous. On the other hand, Josaphat is a curious name: it sounds like Joseph, which seems biblical; it took centuries before a scholar realized it really derived from Arabic Yūdasaf, which is derived from the Sanskrit Bodhisattva, "Enlightened One." A monk named Euthymios of Athos translated it into Greek in the early 11th century, his work was translated into Latin in 1048, and the story spread from there with the names transformed to Barlaam and Josaphat.

Also, there are details of the story—like Barlaam showing Josaphat a vision of the pit of Hell that awaited him if he did not become a Christian—that are lifted directly from the story of Buddha.
Posted by Daily Medieval at 7:00 AM