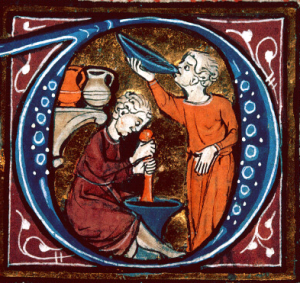 There are several collections of medieval recipes in existence, both in printed form and online; this blog has referenced them before. A new one may be making its way into the world soon. And by "new" I mean one that is very old.

Earlier this year, a researcher at Cambridge* discovered, while looking at a 12th century manuscript on medicines from Durham Cathedral, what she realized was a series of recipes that were culinary, not medicinal. The manuscript was produced about 1140, making these recipes the earliest known in Medieval England, predating any others previously discovered by about 150 years.

One of the recipes might be worth trying for Thanksgiving:


For “hen in winter’: heat garlic, pepper and sage with water.

This terseness is typical of medieval recipes. My linking of it with Thanksgiving is explained by the following:


The recipes are for sauces to accompany mutton, chicken, duck, pork and beef. There’s even a seasonal version of the chicken recipe, charmingly called “hen in winter”. We believe this recipe is simply a seasonal variation, using ingredients available in the colder months and specifying “hen” rather than “chicken”, meaning it was an older bird as it would be by that time of year. The sauces typically feature parsley, sage, pepper, garlic, mustard and coriander which I suspect may give them a middle eastern, Lebanese feel when we recreate them. According to the text, one of the recipes comes from the Poitou region of what is now modern central western France. This proves international travellers to Durham brought recipes with them. [source]

The Blackfriars Restaurant in Newcastle attempted to recreate the sauces and dishes in April 2013. Ultimately, an analysis of the manuscript and the refined recipes themselves will be published, giving us more insight into the medieval diet, cultural practices, and perhaps even international communication and trade.

*Professor Faith Wallis of McGill University, for the record.
Posted by Daily Medieval at 7:00 AM