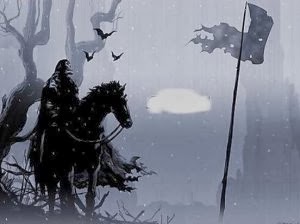 Orderic Vitalis (1075-c.1142) has been mentioned here and here for his history writing. The 13 books of his Historia eccliastica ["Ecclesiastical history"] told many tales of his time that had nothing to do with the Church. One of his anecdotes is truly outré.

While discussing some of the travails of William Rufus, he interjects a tale of a priest of Lisieux that took place on 1 January 1091. The priest, heading home at night from visiting a sick man, heard a loud noise coming along the moonlit road, as of an army. He decided to flee toward some trees in a field to hide himself, but as he ran toward them*


he was stopped by a man of enormous stature, armed with a massive club, who, raising his weapon above his head, shouted to him, "Stand! Take not a step further!" The priest, frozen with terror, stood motionless, leaning on his staff.

The giant stands by his side and awaits the arrival of the crowd making the noise.


a great crowd of people came by on foot, carrying on their heads and shoulders, sheep, clothes, furniture, and moveables of all descriptions, such as robbers are in the habit of pillaging. All were making great lamentations and urging one another to hasten their steps. Among them the priest recognized a number of his neighbours who had lately died, and heard them bewailing the excruciating sufferings with which they were tormented for their evil deeds. They were followed by a troop of corpse-bearers, who were joined by the giant already mentioned.

But there was more after this:


Then followed a crowd of women who seemed to the priest to be innumerable. They were mounted on horseback, riding in female fashion, with women's saddles which were stuck with red-hot nails. The wind often lifted them a cubit from their saddles, and then let them drop again on the sharp points. Their haunches thus punctured with the burning nails, and suffering horrible torments from the wounds and the scorching heat, the women pitiably ejaculated, woe! woe! and made open confession of the sins for which they were punished, undergoing in this manner fire and stench and unutterable tortures for the obscene allurements and filthy delights to which they had abandoned themselves when living among men.

He then sees a knight on horseback, who stops to speak to him, revealing himself as the priest's brother, and says:


"You deserve to die, and to be dragged with us to partake of the torments we suffer, because you have rashly laid hands on things which belong to our reprobate crew; no other living man ever dared to make such an attempt. But the mass you sang to-day has saved you from perishing. It is also permitted me thus to appear to you, and unfold to you my wretched condition. After I had conferred with you in Normandy, I took leave of you and crossed over to England, where, by the Creator's order, my life ended, and I have undergone intense suffering for the grievous sins with which I was burdened."

There is more (I have placed the whole story here). After this experience, the priest falls ill, but recovers to live another 15 years.

Orderic claims that he was told this tale directly by the priest who experienced it.


*Excerpts all from The Ecclesiastical History of Orderic Vitalis, trans. Thomas Forester, 1956.
Posted by Daily Medieval at 6:30 AM