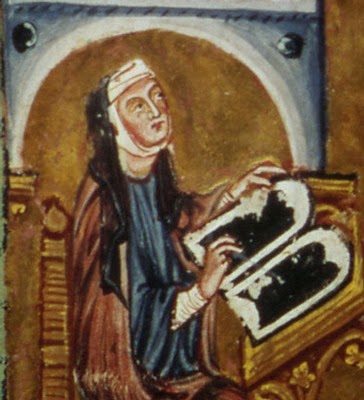 Hildegard of Bingen (1098 - 1179) has been discussed here before, and many know her as a nun and composer of devotional music. Her compositions have been adapted by numerous musical and spiritual groups. Among her writings, however, were also works about the natural world and medicine.

Two works in particular date to the 1150s. Physica ["Physics," or "The Physical World"] is her attempt to explain the whole world from the elements (the four: earth, air, fire, water) to all animals and plants, and even metals and stones, both ordinary and precious gems. One theme that runs through this work is the Genesis-based idea that Man has been given dominion over all the Earth. Everything on Earth has been put there by God, and therefore everything has value, and therefore Man can benefit from everything God put on Earth, from nourishment found in plants and animals to the material value of gems.

The other book was Causæ et Curæ ["Causes and Cures"]. In it, she lists 47 different diseases. Whereas in Physica she listed 200 herbs and other plants, in Causæ et Curæ she describes over 300 plants that are useful for medical use. She might not have had personal experience of all these, since she would have had access to standard texts from such as Pliny and Galen and Isidore of Seville. She wouldn't be the first or last to borrow from Pliny and the others.

She would not, however, give medicines the final say in the treatment of illness:


Hildegard gave physical events, moral truths, and spiritual experiences equal weight. Healing was both medical and miraculous, and God’s will was an important element in her remedies. “These remedies come from God and will either heal people or they must die, for God does not wish them to be healed,” she wrote. [source]

It wasn't just up to God and the herbals. She also believed in using rituals bordering on the magical as part of the healing process. She claimed betony leaves placed next to the bed would reduce bad dreams. Sadness could be countered by mandrake: mandrake she believed was made from the same earth that made Adam. If a sad man dug up a mandrake root, washed it in a fountain for 24 hours, then took it to bed, he could alleviate his depression after reciting: “God, who madest man from the dust of the earth without grief, I now place next me that earth which has never transgressed in order that my clay may feel that peace just as Thou didst create it.” [source] And marshmallow (the plant, not the sweet confection made from it) could counteract evil magic!