The Date of Christmas 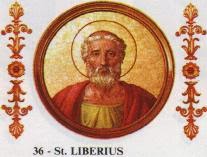 Way back here we mentioned Pope Liberius, sent into exile by Constantius II because he wouldn't censure St. Athanasius for condemning Arianism (Constantius was an Arian). Liberius went to Beroea (modern Véroia in northern Greece), and Felix II became (an anti-)pope.

Liberius' fourteen-year papacy (352 - 366) is usually mentioned in relation to the Arian controversy and his replacement by Felix. But he is given credit for at least one other decision that has endured to modern times: the date of Christmas. The topic of the pagan date of Christmas gets mentioned every year in media, but the details are never revealed. Here they are.

It was clear, according to the mention of shepherds in the Gospel of Luke, that the birth likely happened in springtime. That didn't mean the birth had to be celebrated then; the Church could afford to be pragmatic about that, in its own way. By the 3rd century, Christians were already celebrating January 6th as the day when Jesus was revealed as divine, the Feast of the Epiphany. We now turn to one scholar:


About the beginning of the third century there arose in the Western countries a new opinion on the person of the Saviour. He was now held to have been a God from birth, His Father having been God Himself. [...] Within little more than a century that new dogma conquered the countries round the Mediterranean, [...] In the face of that view it could scarcely any longer appear proper to celebrate the memory of the deification of Christ in the festival of Epiphany on January 6. [Yule and Christmas: their place in the Germanic year, by Alexander Tille, p.120]

In 354, Liberius celebrated not only January 6 as "the appearance of Christ in God-like glory," but also he enforced December 25 as the actual birth, to reinforce the idea that Jesus was God from birth, not deified 12 days later. (And there's a bonus explanation: the 12 days of Christmas exist because of the dual celebrations from 25 December to 6 January.)

Liberius could not have been unaware of the long-term affects of this positioning. He knew that he was appropriating a day that was important to the Roman calendar: the old Dies Natalis Solis Invicti ["Day of Birth of the Unconquered Sun"]. By taking over that celebration he would eventually replace the Roman pagan festival with the Roman Christian one. I say "Roman" Christian because, in the Eastern Church the date of the Epiphany remained the primary date to celebrate.
Posted by Daily Medieval at 7:00 AM