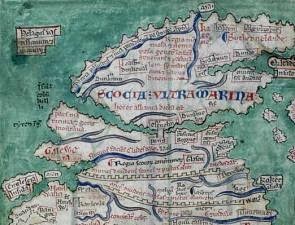 Scotland was not always a unified country. Like most countries, it was a collection of tribes with their own loyalties and mutual enmity. Early Scotland had several Pictish kingdoms in the north, the Gaelic-speaking kingdom of Dál Riata covering the peninsulas in the west, and Alba to the southeast. Further south, in what was later called Northumberland, was the kingdom of Anglo-Saxons called Bernicia.

There was a lot of fighting, with borders shifting and territories captured and re-captured. Despite what the movies make of Scotland versus England, Scotland versus Scotland was more historically significant, as the country shaped itself through bloodshed. One of the most significant battles on the way to the future of Scotland was the Battle of Harlaw, fought over a large part of northern Scotland, the Earldom of Ross.

The dispute started with Euphemia Leslie, the Countess of Ross. She inherited Ross in 1402 upon the death of her father, Alexander Leslie, but was not in a position to keep it. She was persuaded to relinquish the Earldom to John Stewart, the Earl of Buchan and second son of Euphemia's grandfather (and therefore her uncle).

Euphemia's Aunt Mariota, her father's sister, had become the heir-presumptive when Euphemia first inherited. Seeing the Eardom go to someone else was upsetting, to say the least, and her husband Donald, Lord of the Isles, invaded Ross to take it for his own. 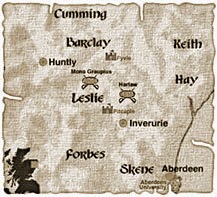 Donald captured Dingwall Castle and then marched on Aberdeen with 10,000 men, running into over a thousand men gathered to counter him, near Harlaw. In a battle that took place on 24 July 1411, Donald lost one-tenth of his forces and killed 500 of the enemy before giving up on Aberdeen.

The Battle of Harlaw was considered one of the most brutal in Scottish history, so much so that it was called "Red Harlaw."

Harlaw "settled" nothing, however. Within a year Ross had been re-taken by the forces of Euphemia's grandfather; then, in 1424 it was given to Mariota.

A ballad about the battle can be heard here.
Posted by Daily Medieval at 7:00 AM

Email ThisBlogThis!Share to TwitterShare to FacebookShare to Pinterest
Labels: Battle of Harlaw, Scotland