Olga of Kiev, the Evil Saint 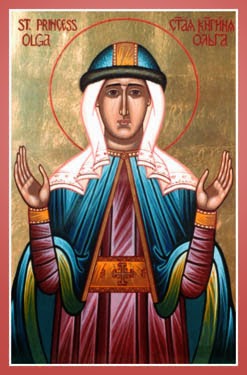 We touched on the Christianization of Kievan Rus when talking about the Varangian Guard. This Christianization did not happen all at once. Something was happening by 867, when Photius, the Patriarch of Constantinople, said that the Rus were taking to Christianity with enthusiasm. Still, other historical sources are clear that paganism was still strong in the following century. Still, when ruler Vladimir the Great was baptized some time in the 980s, bringing his family and all of Kiev with him, it is fair to say that the place was "officially" Christian.

That does not mean, however, that everyone immediately became a gentle, "turn the other cheek" follower of the Golden Rule.

Igor I of Kiev ruled Kievan Rus from 912 until his death in 945 during the Drevlian Uprising. The Drevlians were a Slavic group with a wide territory, and they wanted Igor's wife Olga to marry their leader, Prince Mal, so that he would become king of the Rus. Olga intended to became regent for her son, Sviatoslav the Brave, and wanted nothing to do with Prince Mal. When an embassy of 20 men were sent from Mal to persuade her, she made an elaborate plan.

She had a large trench dug in her hall, and had her people carry the 20 men in the boat they came with into the hall as a show of honor to the Drevlians. She then had the boat dropped into the trench and had them buried alive.

She then sent a message to Mal that she would marry him, but he had to show her honor and persuade her people that this was the right decision by sending his best and most impressive nobles as her escort to Mal. When this new and aristocratic assemblage reached Olga's court, she offered them a fancy building to bathe and clean themselves up after their journey. Once they were inside, she secured the building and set fire to it.

She then asked that the Drevlians prepare a funeral feast so that she might mourn her husband, and she would come to them; when they were drunk, her army slew 5000 Drevlians, then returned to Kiev to expect an attack.

The Drevlians were done: they offered terms of surrender. Olga told them she would accept three pigeons and three sparrows from each household, an easy tribute. The people were glad to get off so lightly, and delivered the birds. Olga instructed her men to attach with thread to each bird a small piece of sulphur wrapped in cloth. At night, the birds were released, whereupon they flew back to their nests in the houses from which they came. The houses were set on fire, and the fire spread so quickly that there was no chance to save anything.

That's right: she's a saint. As one of the first of the Kievans to be baptized, and for spreading Christianity so diligently (one wonders what tools of persuasion she used), she was named a saint. She failed, however, to convert her son; Vladimir I, who made the Kievan Rus' conversion "official," was her grandson.
Posted by Daily Medieval at 7:00 AM