The Assize of Clarendon 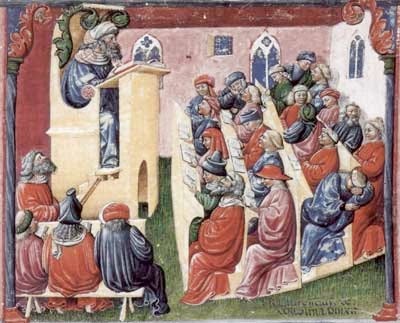 King Henry II of England had problems. The period known as The Anarchy was over, but the mercenaries employed during it were causing trouble in England now that no one was paying them. "Crusades Fever" was rampant, and aristocrats were leaving their lands for years at a time to liberate the Holy Land; when they returned, they might find someone else farming their estates without permission—and no office of land management that kept records as to who was the rightful owner. And, of course, the Church was doing as it pleased regarding the law, exercising sole authority over its clergy rather than allow them to be bound by civil laws.

Henry needed to put some order onto this chaos. We have already seen (later in his reign) the Assize of Arms. The major instrument of establishing new policies was the Assize of Clarendon in 1166. It was an attempt to establish the rule of law based on evidence and analysis rather than Trial by Ordeal, and to rest final authority with the Crown and its representatives.

It made certain that sheriffs kept records of any criminals in their territories, and that sheriffs would notify other sheriffs of criminals that fled in their direction, to be captured and held. A cleric who was found guilty in an ecclesiastical court was stripped of his office and turned over to the civil court. Compurgation was no longer sufficient as a defense in a felony. Sheriffs had to respond to requests by the "itinerant justices" (the "justices in eyre") sent around by the king.

One important innovation that modern law historians make note of is the first part of Clarendon:

This is seen as the first step to "Trial by Jury" with  jury of twelve of your peers chosen to analyze a case and help pass judgment.
Posted by Daily Medieval at 6:00 AM