[see Part 1 here and Part 2 here, and the preface to today's here] 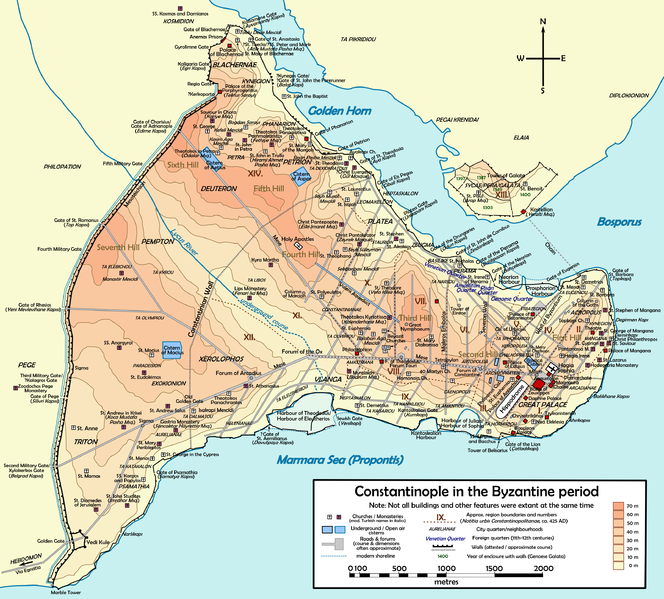 So the Crusade left in spring of 1203 to sail to Constanbtinople, to demand that the usurper, Emperor Alexios III Angelos, relinquish the throne to his predecessor, Isaac II Angelos. With the Crusaders was the son of the blinded and imprisoned Isaac, Alexios IV Angelos, who had offered the sun and moon for their help to eliminate Alexios III.

Of course Constantinople saw them coming and was prepared, its army lining the shore where the crusader ships landed. The Crusader cavalry surprised the Byzantine army, which ran away a short distance before turning back and fighting at the Tower of Galata. This was a strategic point for Constantinople. A huge harbor called The Golden Horn was the chief access to sea-level Constantinople; the entrance to the Golden Horn was blocked by a chain stretched between two towers. Once the Crusading army conquered the Tower of Galata (which they did), the chain was lowered and the fleet had ready access to the city.

Still, the walls were strong and the city gates shut. The Crusaders showed Alexios IV to the citizens on the walls, saying "Here's your king!" For Constantinople, however, Alexios III had ruled since 1195 and not done such a bad job that they couldn't forgive his his unorthodox rise to the throne. They saw no need for Alexios III, or to release Isaac II from prison.

The Crusaders laid siege to the city on 17 July, attacking the walls from land and sea. Although defended ably by the Varangian Guard, the advances made by the Crusaders prompted Alexios III to flee to Thrace; the city released Isaac II and re-proclaimed him Emperor. The Crusaders forced Isaac to name his son emperor, and Alexios IV was put on the throne.

It was time for Alexios IV to make good on his promise to help the Crusade. According to one chronicler:


After he had been crowned the barons demanded their pay. He said he would very willingly pay what he could and at that time he paid 100,000 marks. Of this sum the Venetians -received one-half; for they were to receive one-half of the conquests. Of the 50,000 which remained, 36,000, which the Franks still owed for the vessels, were paid to the Venetians. And all those who had advanced money to pay for the passage were paid out of the 14,000 marks which the pilgrims had left. [Robert de Clari, Chroniques]

Then, like at Zara, the Crusaders settled in for several months to await the preparations for the rest of Alexios' promised aid. During this time, tensions between East and West, between Greeks and Latins, ran high. The locals blamed Alexios for bringing these Crusaders into their midst. Then, in January of 1204, Isaac II died. Perhaps it was only respect for the Emperor of a decade ago that held the city in check; whatever the case, the citizens no longer looked favorably on Alexios IV. Alexios was deposed during riots, so naturally he turned to the Crusaders for help again, with complicated results.

[to be continued]
Posted by Daily Medieval at 7:00 AM