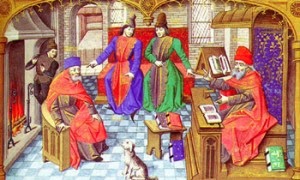 An "eyre" (Middle English, from Old French eire from Latin iter, "journey") was "a circuit court held in medieval England by a judge (a justice in eyre) who rode from county to county for that purpose." (New Oxford American Dictionary). The justices in eyre, sent from Westminster to all counties (all but two that is; see below), would hear and rule on crown pleas (criminal offenses), and civil pleas (lawsuits).

Eyres were declared in the Assize of Clarendon in 1166, put in place by the rule-loving Henry II (1133 - 1189)—who wanted to get away from solutions that involved Trial by Combat or Trial by Ordeal—but we have no records of the eyres from that decade. By the end of the century, justices in eyre were required to keep careful records so that sheriffs knew from whom and how much in fines they were supposed to collect. The resulting "eyre rolls" are rolls of parchments stitched together, filled with Latin abbreviations and legal terminology.

Durham and Chester were exempt from the justices in eyre. The king had no jurisdiction there, because they were palatinates, ruled by a local palatine [Latin: "of the palace"], a figure who had jurisdiction that normally belongs to a king. Durham and Chester were under the control of their bishops, and eyres could only be conducted there if a bishop were dead and his successor not yet appointed.
Posted by Daily Medieval at 7:00 AM