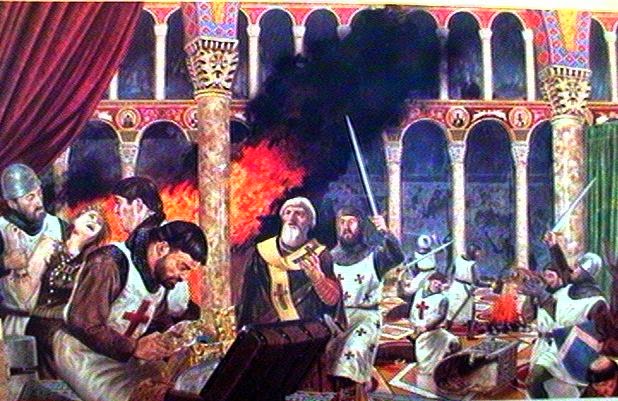 With former Emperor Isaac II Angelos dead at the end of January 1204, his deposed son Emperor Alexios IV Angelos turned to the Crusaders, asking for help. But they had been through this before, and Alexios had not honored on all his promises.

Imperial chamberlain Alexios Doukas proclaimed himself Emperor Alexios V—the citizens accepted him—and strangled Alexios IV. He then tried to get the Crusaders to leave his empire. In March of 1204, the Venetians and Crusaders decided there was no way to achieve a happy outcome without simply attacking Constantinople and taking what they wanted. Siege and military actions lasted from the end of March until 12 April, when several dozen Crusaders managed to breach the walls and allow some of their comrades in. A fire they started burned down a large section of the city. That night, Alexios V fled.

Three days of pillaging commenced, destroying or damaging or stealing countless works of art. Thousands of citizens were killed. The great Library of Constantinople was destroyed. The Hagia Sophia was desecrated. A contemporary Byzantine chronicler says:

Nor can the violation of the Great Church be listened to with equanimity. For the sacred altar, formed of all kinds of precious materials and admired by the whole world, was broken into bits and distributed among the soldiers, as was all the other sacred wealth of so great and infinite splendor.
When the sacred vases and utensils of unsurpassable art and grace and rare material, and the fine silver, wrought with gold, which encircled the screen of the tribunal and the ambo, of admirable workmanship, and the door and many other ornaments, were to be borne away as booty, mules and saddled horses were led to the very sanctuary of the temple. Some of these which were unable to keep their footing on the splendid and slippery pavement, were stabbed when they fell, so that the sacred pavement was polluted with blood and filth. [link]

Many of the priceless works of art wound up in Venice. For Venice and for Doge Enrico Dandolo, this was sweet revenge for an incident between Constantinople and Venice 30 years earlier, when Venetians in the city had all their property confiscated.

The Byzantine Empire was divided between Venice and the Crusading force, who elected Baldwin of Flanders to be their emperor. The upper classes and royalty of Constantinople fled the city; some of hem set up their own small kingdoms, in Epirus and Nicaea and Trebizond.

The thought that the Empire and therefore the Eastern Orthodox Church was now in the hands of the West so pleased Pope Innocent III that he lifted the excommunication placed on the Crusaders for having attacked and killed Christians. It would be 800 years before a Pope (John Paul II) would apologize for the tragedy, and for a Patriarch of Constantinople (Bartholomew I) to accept the apology.
Posted by Daily Medieval at 6:30 AM