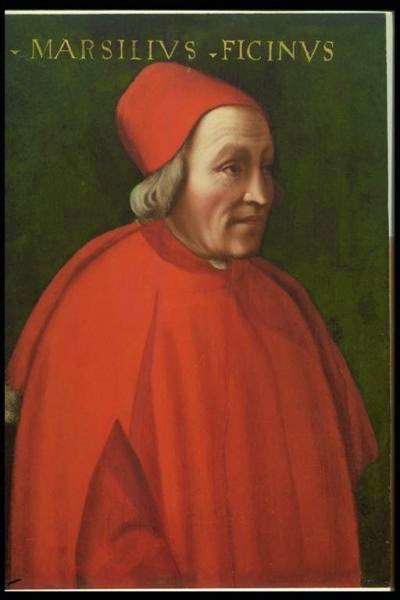 I have always been impressed by the work of Marsilius Ficino (1433 - 1499), but was not sure how to tackle him in a short blog post. Whether we can do justice to him in so brief a span is immaterial: he deserves to be known.

He was born in Florence, son of the physician of Cosmo de Medici, and wound up serving three generations of Medici himself. Cosmo de Medici had Ficino translate Plato into Latin, with an eye to re-creating Plato's Academy in Florence. This may be what made Ficino such a strong proponent of Platonism (now called neo-Platonism). Ficino believed so strongly that Plato (as well as Socrates) and Christianity could be reconciled that he even argued for the reading of Plato in church.

His first major written work was the Theologia platonica ["Platonic theology"], in which he tried to show how Plato's "The One" was clearly the Christian "God," and that everything believed in by the ancients fit into modern Christian knowledge.

In fitting together everything that was "known" about the Universe, Ficino likened magical rituals to Sacraments, and compared pagans' invocation of numerous deities with Christian' prayers for intercession by saints.

He was especially attracted to astrological magic and astrological talismans. His De vita libri tres or De triplici vita ["Three books on life"] tackles various topics. The first book, De vita sana ["On a healthy life"], is specifically for scholars who wish to maintain a healthy life. The second book, De vita long ["On a long life"], is aimed at health for the elderly.

The third book is the most interesting. De vita coelitus comparanda ["On obtaining life from the heavens"] deals with astrological magic. For Ficino, the planets had special powers connected to the Greek gods for whom they were named. It is this work in which he discusses the immortality of the soul and her relationship to all other things, particularly the Soul's nature as a focal point for Body and Mind, bringing them together in Man.

Here also is where he outlines the connection of all things, when he says:


I have said elsewhere that down from every single star (so to speak Platonically) there hangs its own series of things down to the lowest...Under the celestial Serpent or the entire constellation of the Serpent-bearer, they place Saturn and sometimes Jupiter, afterwards daemons who often take on serpent's form, in addition men of this kind, serpents (the animals), the snake-weed, the stone draconite which originates in the head of a dragon, and the stone commonly called serpentine...By a similar system they think a chain of beings descends by levels from any star of the firmament through any planet under its dominion. If, therefore, as I said, you combine at the right time all the Solar things through any level of that order, i.e., men of Solar nature or something belonging to such a man, likewise animals, plants, metals, gems and whatever pertains to these, you will drink in unconditionally the power of the Sun and to some extent the natural powers of the Solar daemons. [Ficino, Three Books on Life, Bk. III, Chap. 14]

Ficino assumes correspondences between all things, especially those of a similar (for example, "snake-like") nature. He also ties in mathematics, claiming like Plato that numbers and shapes have correspondences to other things in Nature.

His works were published and read up until the 18th century, when modern philosophy began to establish its current form.
Posted by Daily Medieval at 7:00 AM