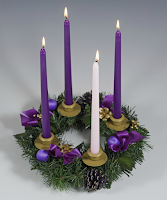 We are now in the Christian season of Advent, from the Latin adventus, meaning "coming." It comprises the four Sundays leading to Christmas Day, leading you to think it was started as preparation for the coming off the Nativity. Good guess, but that's not how it began.

First let us talk about the timing. We are not sure when it was first established, but probably in the 4th century Christians in Spain and Gaul began a period of penance and fasting starting on 11 November, the feast day of St. Martin of Tours (c.316/336-397). They were preparing for the baptism of new christians, which would take place on January 6th, the Feast of the Epiphany. The activity spread, and Roman Christians in the 6th century started associating it with the coming of Christ's birth on 25 December.

These days, Advent begins on the Sunday nearest 30 November, the feast of St. Andrew the Apostle, and only lasts four Sundays. It is therefore a "floating holiday" like Easter, and can start any day from 27 November to 3 December. The change seems to have come about by the 9th century: Pope Nicholas I mentions the shortened span in a letter to the Bulgarians. The Eastern Orthodox Church celebrates from 15 November until Christmas.

The Advent wreath, like so many traditions involving evergreens, began in northern Europe. The wheel-shaped greens represented the cycles of the year and the promise of life after winter. The candles represented the warmth of hope in the returning Son/sun. Three purple candles represent hope, peace, and love, and are lit on the 1st, 2nd, and 4th Sundays. The pink candle, representing joy, is lit on the 3rd Sunday. Purple was not a cheap color to produce, and dyeing candles with a royal color indicated the significance of Christ the King's birth.

(The Advent calendar? That was concocted in Germany in the 1800s.)
Posted by Daily Medieval at 7:00 AM