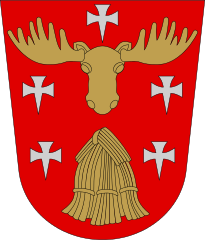 Saint Hubertus' conversion from materialism to piety was first discussed here. After he died, on 30 May 727, his bones moved around a bit. He was buried in the church of St. Peter in Liège, but his bones were exhumed so they could be interred in a Benedictine abbey (now named St. Hubert's Abbey) in the Ardennes region. The Ardennes was important to him—his nickname was the Apostle of the Ardennes—because he originally loved to hunt game there. After his conversion he "hunted" folk in the region to be convert them to Christianity. He would not destroy their "idolatrous" sites, but give the converted the opportunity to destroy the sites themselves as proof of their new love for Christianity.

His coffin became a focal point for pilgrimages, until it disappeared during the Reformation. Just as his physical remains were disappearing from view, however, his spiritual reputation was building. Because he was of royal birth, he was considered one of the Four Holy Marshals in the Rhineland. (That's for another day.) Several military orders were founded in his name. In the Church of England, at least two churches were dedicated to him. There is a St. Hubertus brand of alcohol, and the image of the stag with the cross between his antlers is their logo.

Although he is most commonly referred to as the patron saint of hunters, he is also given patronage for an amazing and varied number of other areas. Here is the full list:


I cannot find an explanation for the link to optics, but I can tell you a story about him that involves metal and connects to some of his prominent patronage areas. I'll get to that next.