You've seen them. Lots of times. Three circles interlinked. You find them in jewelry, and in the label of Ballantine beer. They may be used as a symbol of the Trinity, or the logo of the 25th International Congress of Mathematicians.

The name of the design comes from its use in the coat of arms of the Borromeo family. The family owns three islands in Lake Maggiore, and might have designed the rings to represent those. In any case, the design is used frequently in the Baroque palazzo and gardens built by Vitaliano Borromeo (1620-1690).

But the design goes back hundreds of years before Borromeo. We find its equivalent also in three triangles called "Odin's Triangle" or the valknut (Old Norse valr = "slain warriors" + knut = "knot"). The valknut was carved in stone pillars as far back as the 7th century. 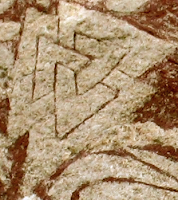 One curious fact about the Rings is that, although we call them "interlinked" or "interwoven," they sort of aren't. In the above illustration, place your hand over the red as much as you can, and you'll see that the blue and green aren't linked. It's the same with any other two colors: no two are linked except by a third that runs through them. In this way, it is similar to a three-strand braid. Braid three ribbons together, and when you pull one out, the other two completely disengage.

And for a treat: how about some Borromean Onion Rings?
Posted by Daily Medieval at 7:00 AM