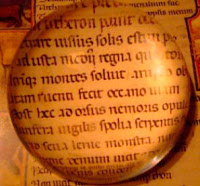 Back here we spoke about the manufacture of glass, but when and where did glass come to be used for enhancing and correcting vision?

Ptolemy (c.100-170CE) wrote in his Optics about glass shaped so that it enlarged an image. His ideas were expanded on by the "Father of Modern Optics," Hasan Ibn al-Haytham, whose Book of Optics (c.1021) spread through Europe at (coincidentally?) about the same time that we get records of "reading stones."

A reading stone is a glob of transparent substance, flattened on the bottom but with a curved top, making it in essence a convex lens. It was (still IS, actually) meant to be placed on and slid along a line of text, causing the letters below to expand and be more easily read. I call it a "substance" because it wasn't necessarily glass. Early ones were ground from quartz, and they can be had today in glass or plastic.

Several lens-shaped items of quartz have been found in Viking graves on Gotland in Sweden, some mounted in silver. They date to the 11th or 12th centuries. They might be reading stones, although several are not shaped to be good at focusing.

But when were lenses put into a frame for enhancing vision? In 1301, in Venice, there were guild regulations governing the sale of eyeglasses. The Dominican friar Giordano da Pisa delivered a sermon in February 1306 in which he said:


It is not yet twenty years since there was found the art of making eyeglasses, which make for good vision... And it is so short a time that this new art, never before extant, was discovered. ... I saw the one who first discovered and practiced it, and I talked to him.

So far as we can trace, then, eyeglasses were first made in Italy around 1290.
Posted by Daily Medieval at 7:00 AM