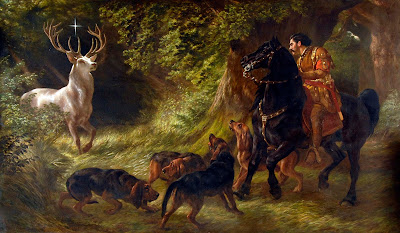 Saint Hubertus (c.656 - 30 May 727), also called the Apostle of the Ardennes, was said to be the eldest son of Duke Bertrand of Aquitaine. He was a well-liked young man who found fame and position wherever he went, ultimately being named "grand-master of the household" at the court of Austrasia at Metz, marrying the daughter of a count. His wife, Floribanne, died in childbirth, causing Hubertus to withdraw from public life out of grief. He went to the forests of Ardennes and lived by hunting.

Then, on the morning of a Good Friday, when the faithful were thinking of spiritual matters, Hubertus went out to hunt. Spotting a magnificent stag, he started pursuit, but the animal turned to face him. Hubertus beheld a cross suspended between its antlers. A voice spoke: "Hubert, unless thou turnest to the Lord, and leadest an holy life, thou shalt quickly go down into hell!"

This anecdote was linked to Hubertus in the 15th century. It is connected at a much earlier time to the legend of St. Eustace from the 2nd century. (The historicity of Eustace was eventually challenged, but there was no sense letting a good conversion anecdote go, so it got attached to the life of a known hunter.)

Later reports embellished the story, especially in Germany, where it is said that the deer lectured Hubertus on responsible hunting, with rules still taught in Germany today:


Only shoot when you can be sure of a quick and painless death
Choose older stags, past their prime
Never kill a doe with fawns

Hubertus found Bishop Lambert in Maastricht, who became his spiritual mentor. This is when Hubertus left the position of Duke of Aquitaine to his younger brother, Odo, as well as the guardianship of his son. Hubert later replaced Lambert as Bishop of Maastricht. He became famous for his preaching and piety.

As is often the case, however, men become even more prominent long after their death, which was the case with Hubertus. I'll discuss that next, and maybe discuss his odd connection to the Supreme Court of the United States.
Posted by Daily Medieval at 7:00 AM