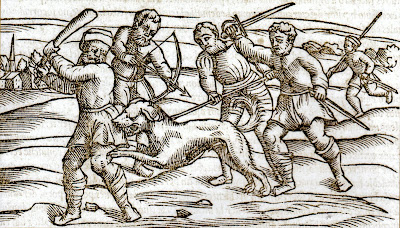 Rabies, from the Latin rabies which means "madness," has been noticed for a long time. The Codex of Eshnunna (c.1930BCE), found on two cuneiform tablets and pre-dating the Code of Hammurabi, declares the owner of a dog who shows signs of rabies is to be fined if the dog bites someone. Aristotle in 300 BCE described rabies as a disease that can be transmitted from a dog to the dog's victim. Excess salivation was a sign that a dog owner should take care to prevent the dog from biting someone. Rabies was known to Avicenna, who explained its symptoms, method of transmission, and treatment.

Treatment almost always failed until the modern era. There were reported cases of people surviving before modern methods of treatment, but not until Louis Pasteur and Émile Roux developed their vaccine in 1885 was there an effective way to prevent the spread.

But the Middle Ages had a solution: St. Hubert's Key.

St. Hubert, or Hubertus, was the patron saint of hunters and hunting, and therefore of hunting dogs, and therefore of rabid dogs. St. Hubert's Key was an example of a sacramental, which is the church's word for an amulet or talisman. Whereas an amulet or talisman were supposed to have magical properties, a sacramental's effectiveness depended on the faith of the user.

St. Hubert's Key was a piece of iron: either a nail or a cross or cone. They were given out by the monks of the Benedictine abbey where Hubert's remains were, as tokens to go to folk who could not make the pilgrimage to the abbey. These items were hung on the wall of your house for protection against disease.

How did this cure rabies? The piece of iron would be heated and placed on the site of the bite by a priest. The practice is recorded in the 1870s in the Ardennes region (where Hubert was active while alive) of branding a dog with St. Hubert’s Key to guard him from rabies.
Posted by Daily Medieval at 7:00 AM