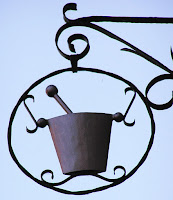 These days, we are assailed by advertising, and we possess technology that allows us to find what we need merely by asking the right question into a hand-held device. (I wonder that anyone in their teen years knows what it's like to use the yellow pages, or if they are even aware of what the phrase "yellow pages" means to the older generation.)

Centuries ago, signs or symbols indicated certain places of business. When most of your population cannot read, you needed to find the right image to represent your profession, such as the mortar and pestle for an apothecary, a boot for a cobbler, scissors for a tailor, etc.

It might not be a painted sign. Roman custom was to hang vine leaves to indicate a tavern where wine was served. This custom was brought to Britain, but in the absence of grapevines they used holly. A bush of holly was a common indication that wine was served within. If you made and sold beer, you would hang a long pole outside, indicating what you stirred ale with. Leaves on a pole let the traveler know that both beer and wine were available.

Of course, where there is food and drink, there should be quality control.


In 1389, King Richard II of England, decreed that landlords must put signs outside their inns, so that inspectors could identify and visit them; there is a record from 1393 of a publican being prosecuted for not having a sign. [source]

Of course, not all advertising was static. A 13th century poet, Guillaume de la Villeneuve, wrote the poem "Les Crieries de Paris" [Street cries of Paris]. Here's a sample of how he felt about merchants advertising their wares or services:


Although they will not stop screaming
Through Paris until the night.
Do not think it tires them
For they will never stop.
Listen to what is being shouted at daybreak:
"Lords, go to the baths
And in the ovens without delay,
The baths are hot, I'm not lying!"
Then you will hear the sound [of]
Those who shout fresh herrings.
"At the tide, the others shout,
In sage and white herring, fresh salted,
I would like to sell my herrings."

The introduction of mass printing and cheap paper meant signs and flyers could circulate more easily, eliminating the need for criers.
Posted by Daily Medieval at 7:00 AM